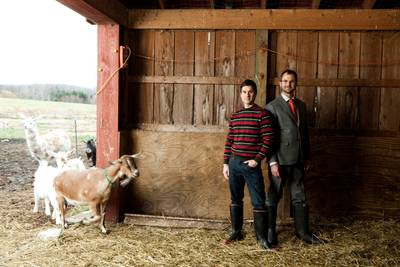 Did you ever wonder what it would be like to give up all the stress and pressure of your big city life and move to a farm in the country? Well for Josh Kilmer-Purcell and Brent Ridge, aka The Fabulous Beekman Boys, it’s actually just as stressful – but 100 times more fulfilling.

Brent is a doctor who used to work for the domestic goddess Martha Stewart and Josh is a marketing exec and former drag queen named Aqua. But in 2008, the couple bought the Beekman Mansion in Sharon Springs, New York, and started a new life raising goats, growing organic food, and practicing the ways of seasonal living. They also launched a product line called Beekman 1802 selling soap, cheese, linens, stationary, and more — straight from the farm, using local ingredients, materials, and the talent of nearby artisans.

As idealic as it may sound, their new lifestyle is a lot of hard work. But the Beekman Boys aren’t just following their own dreams, they’re helping their neighbors realize theirs as well.

In a recent interview Brent explained why their new venture is so important to them, “All of the products that you see on our website we developed because we’ll go to some neighbor’s house. For instance, the heirloom linens, we went to a neighbor’s house and saw an antique loom in her living room and were like, “Oh, what do you do with that?” And she said, “Well, let me show you.” And so she showed us how to weave. And so we were like, “Oh, well, we design some products, would you want to make them for us?” And, of course, she would love to because she loves to weave but she never really had a market for it.”

He continued, “And the same way with everybody, the stationer that we work with, the blacksmith - that’s how we find them. We find people that have these exceptional skills and develop products using those skills. And they’re just so thrilled because then that helps them make a living doing the things that they love. And I think that’s what we’re most proud of is that with Farmer John we’re helping him make a living at what he always dreamed about doing and all of our crafts people we’re helping do that as well.”

But this isn’t just a bland show with a message, the lovable charm of The Fabulous Beekman Boys is the most entertaining new show on TV. Check it out on Wednesday nights at 9:00 PM on Planet Green.

View the rest at Beliefnet's Idol Chatter.
Posted by Pop Culture Passionistas at 1:00 AM