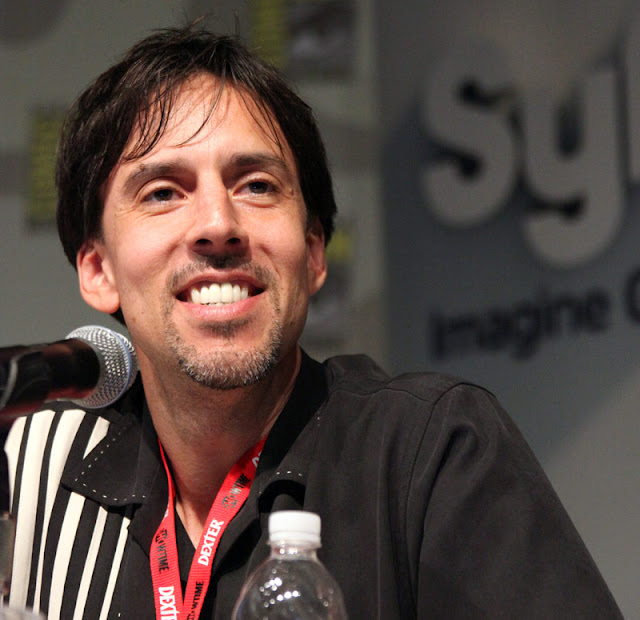 , did a little scientific experiment in crossing over this week. In an episode called "13.1" on Tuesday night, Douglas Fargo (played by Neil Grayston) from Eureka was sent to Warehouse 13 in an effort to get his antiquated computer system updated. Tonight Eureka reciprocates in an episode called, appropriately enough, "Crossing Over." This time Claudia Donovan (played by Allison Scagliotti) leaves the Warehouse and pays a visit to Eureka.

Of course, danger and mystery ensue on both occasions. We recently spoke with Eureka creator and Executive Producer, Jaime Paglia, about how this crossover came about.

Read the interview and check out our video interview with Eddie McClintock and Joanne Kelly for more inside info on the cast of Warehouse 13 after the jump.

Q: Can you talk a bit about the crossover that’s coming up with Warehouse 13?

JAIME: Sure. We’re thrilled that Warehouse has been doing as well as they have. And most of our staff and cast and crew are friends with the Warehouse folk from other jobs previously or just from being in the same world. So we were at Comic-Con last year and I ran into Jack Kenny who is the Executive Producer and Saul Rubinek who is of course the lead on that show and had played a very pivotal character for us, Carl Carlson, in Season 1. And I said we should do a crossover where we can have Saul play both characters or we could send Carter and Joe over to help out with you guys or he could send someone else to us.

And we joked for a little while about well if we send our characters to your show then it’s your headache not ours. So until the network, I think, finally said, "No, this is actually something that we want to do."

Bruce Miller is co-show running with me this year and as we were crafting our season and Jack and his team were crafting theirs, we sat down and met and said. "Okay, look this is what we’re doing. What are you guys doing? Let’s figure out if there’s a good place for this to work out where we could send a character to you and you could send a character to us and maybe have it be almost not quite a two-parter but at least [so] it felt like there was some continuity."

And we worked it out. So it worked out in the timing of the schedule that we could have Allison Scagliotti on our show when they were on their production hiatus and we were able to schedule it so that Neil Grayston could go over to their show during an episode where we were a little bit lighter on this character. And I think by everybody’s estimation they both did such a great job. I think they’re the best friends now. They’re dying to work together more.

Q: What will determine if you guys continue doing that?

JAIME: There are a number of factors. I think that it was a good experience for all of us on both shows. Obviously we’ll see how the audience likes it. I know the network has a lot to say about whether they want us to do more. Part of it is honestly just logistics. It’s a challenge just making your own show. It’s a bigger challenge when you’re trying to coordinate your production calendar and schedules of actors and what days they’re working, with another show’s calendar and actors and directors and all of those things.

And you’re looking for windows if we have one of their characters come over we know that out of our seven day schedule we’re going to need them for four or five days. If they’re in the middle of their shooting cycle as well that means that they have to be missing for four or five days from their calendar unless they’re on hiatus. So those are just the nuts and bolts, moving parts that you have to coordinate. But I think it’s something that we are all definitely interested in possibly doing again.

For other interviews with Syfy cast and crews check out:
Warehouse 13 Returns to Scfy Tonight
James Callis of Battlestar Galactica Joins Eureka
An Interview with Haven's Emily Rose and Syfy's Mark Stern