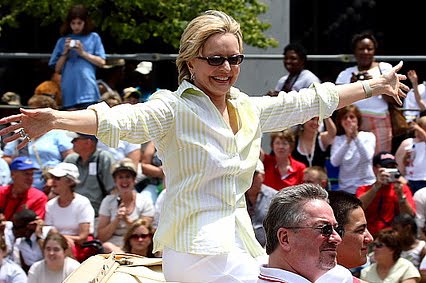 Florence Henderson (that's Mrs. Carol Brady to you and me) is doing her best to pull a full-on Betty White. First there's the recent rumor that she's this season's older contestant on Dancing with the Stars (to be confirmed tonight). Then  there's this summer's appearance as guest host on WWE's Raw

Then add in her RLTV talk show, The Florence Henderson Show (which was nominated for a daytime Emmy). Now all she needs is a Facebook page trying to to get her on SNL

and she could be this year's comeback octogenarian (OK... she's only 76, but who's counting).

Another notch in FloHen's belt is her recent four-week stint in the Nora Ephron stage play Love, Loss, and What I Wore

at the Geffen Playhouse. America's favorite mom ended her turn in the rotating cast production last night. Every four weeks five new all-star actresses take to the stage to tell stories all women can relate to using clothing and accessories, a la The Vagina Monologues

Keep an eye out for Flo. We think you might be seeing more of her, and if you want to see Love, Loss, and What I Wore check it out with Maria Conchita Alonzo, Jami Gertz, and Christine Lahti starting September 1. They aren't Carol Brady but they'll have to do.