The Pop Culture Passionistas at the 2010 Emmy Awards 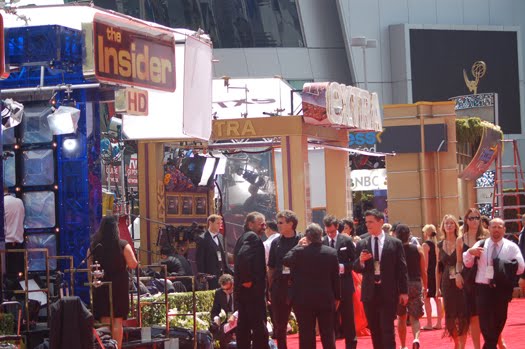 Well it feels a little bit like December 26th here, at the Pop Culture Passionistas' headquarters. The day we've been looking forward too, the day we prepared for since we were little girls, the day we still can’t believe we experienced, has come and gone.

Yesterday, we put on our best party dresses and spent four hours on the red carpet and then a few more in the pressroom at the 2010 Emmy Awards. Flashing cameras, giant gold statues, gorgeous gowns, million dollar jewels, and Hollywood stars surrounded us.

The range of people we spoke with on the red carpet was like some kind of weird Fellini-esque dream. Among many others, we spoke to a clown, a telephone operator, a drug dealer, and a doctor of death. That's Eric Stonestreet, Lily Tomlin, Aaron Paul, and Jack Kevorkian (seriously, the REAL Kevorkian) in case you couldn’t solve our TV riddle.

Since we were there on behalf of the Archive of American Television, we asked people about their TV influences and favorite shows. So tune in this week to see videos revealing which female comedian Wanda Sykes sites as the queen, who has influenced Joel McHale's hosting career the most, and which actor thinks Fred Mertz is the best sidekick in TV history (you'll never guess in a million years).

After the red carpet, it was off to the pressroom where the winners spoke with a room full of reporters. A stream of actors like George Clooney, Tom Hanks, Al Pacino, Kyra Sedgwick, Claire Danes, and Julia Ormond, at times made us wonder if we had been transported to the Oscars, instead of attending the Emmys. But these film greats are among the ranks of fellow Emmy winners Edie Falco, Jane Lynch, and David Strathairn.

To be honest, we were so busy in the pressroom that we didn’t see much of the show. But that's what DVRs are for, right? We did catch that amazingly cool opening number—who would have thought all our favorite TV people could be assembled in one musical act? Add it to our list of dreams come true. And from what we saw, Jimmy Fallon did an outstanding job as host, including that insanely funny tribute to the shows we lost this season. "The island it was mythical, and in the end they died. I didn’t understand it but I tried." Sung to the tune of Green Day's "Time of Our Lives." Genius.