The Real Housewives of D.C. on the White House Party Crashers 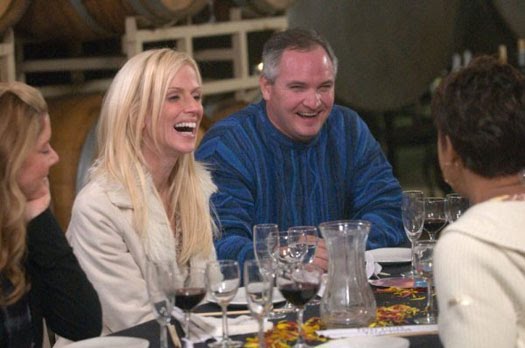 Let’s see. Who’s more likely to get a groundswell of support in a throw-down? Whoopi Goldberg, one of the most beloved actor-comedians of our generation, frequently sighted as a mentor and inspiration by those who know her, or Michaele Salahi, aka the “White House Party Crasher”? It seems like Michaele and her husband, Tareq, might be the only two coming down on the Salahi side on this one.

It all started yesterday when Michaele appeared on The View with her Real Housewives of D.C.cast members to promote the series premiere tonight on Bravo. The seemingly delusional Michaele, later claimed that Whoopi hit her during the middle of the interview. And an argument ensued backstage following the taping.

Today on The View the uncut footage was shown. Whoopi, who was off-stage for most of yesterday’s segment, had walked up behind Michaele and CLEARLY touched her on the back to get her attention before saying, “Excuse me, could you get back to the White House, please?”

After the show, Goldberg caught wind of the fact that Michaele was saying the chat show house hit her. Whoopi being Whoopi, she admitted today that she used “choice words” when confronting Michaele backstage and even “more choicer words” when Tareq got mixed up in the verbal sparring and started taking her picture with his Blackberry.

And, of course, it’s all coming to a head on the day of the Real Housewives of D.C. premiere. Sounds like a ratings booster to us.

We spoke recently to two of the other housewives Stacie Scott Turner and Mary Schmidt Amons. They answered questions about Michaele and Tareq and their opinions about whether or not the Salahis did in fact crash the White House party.

Read the interview and see the uncut View footage after the jump.

Q: What do you guys make of the whole Salahi incident and the attention that they're getting with the launch of the show? Do you think that there's too much attention on them and with this show?

STACIE: I think the viewers are going to be so surprised to find out that the White House party crash is not the crescendo of the show. It is a small part of five really interesting story lines and it by no means is all the drama with the show.

MARY: Right. Correct. It's just going to be one small snippet.

Q: Are they going to be mentioning it throughout or is it just limited to one episode or an aftermath maybe?

MARY: I don't think we can really speak to that because we haven't seen it… but… I think it's probably going to be something that is featured in the beginning and… I'm not sure how they're going to work it and deal with it. But overall it's very clear to us that the show is not all about the Salahis.

We spent five months together. We spent a lot of time-sharing our stories and I think that the American public is going to be really interested and inspired by our stories.

Q:  A lot of people will be tuning in because of the Salahis. So what would you say to those people that are tuning in expecting that the show is about that?

So, if that's what entices the viewer, great, we'll take it. But once they get there they're going to see there's way more meat than just that one incident.

STACIE: I was just shocked that anybody would have the gall to crash a party like that. I just personally couldn't imagine. So it just makes you wonder… did they really believe they were invited? Because I just can't imagine who would really have the gumption to do that.

Q: Well, we saw her hug about twelve different people and say, "I love you," in a two-minute sequence in the first episode. Is she very out there?

STACIE: Well, Michaele… is a very friendly, light-hearted, outgoing person. She… and Tareq have been nothing but friendly towards [my husband] Jason and I. And I think that she's just a social butterfly. So whereas it may seem contrived, I think it's her. I think that's really her.

Q: When all the coverage of the White House crashing was happening, were you concerned that it might tarnish the show?

STACIE: It's interesting, because we were all totally caught off guard like the rest of America when the incident happened. And considering that most of us had interacted with Michaele and Tareq in other scenes it was so unbelievable, because… they've been nothing but nice and normal around us.

So, to answer your question things did change a little bit after that point. And we are equally interested to see how… that portion of the show unfolds, to see what that was all about.

Q: And when it happened did you have a sense at the time that it might be the defining incident, at least for people's curiosity about the show?

STACIE: Do you mean after the incident happened?

Q: Yes, after the incident happened did you realize that it would be maybe the main reason people might be curious about the show?

STACIE: Oh, well, yes. It became like this global phenomena… I mean so I know the entire world knows about the incident. So we anticipated that that would definitely be a draw, but it is by no means the climax of the show.

Q: And in the wake of the Salahi incident, it seemed like the investigators were talking to everybody who had any connection with the Salahis. Did they talk to you?

STACIE: Yes they did.

Q: What did they want to know?

STACIE: They just wanted to know if I had any information or prior knowledge of the Salahis… going to the dinner party, which I did not.

Q: Stacie, you never actually use the word alleged talking about Michaele's appearance at the White House. For your money, she crashed, yes?

STACIE: I heard what everybody else has heard, it appears that she crashed but interestingly she said she didn't and so I'm really curious to hear what that story is.

Q: And Mary, what about you, do you think she did it?

MARY: It's hard to say really. I mean I think there's a lot of variables here that we don't know about and apparently they're going to be penning that in a book, so that'll be interesting but somehow they got in.

STACIE: Yes and they walked in.

MARY: They walked in, I don't know. It's mind-boggling.