America's Got Talent Star Tries to Help His Grandmother 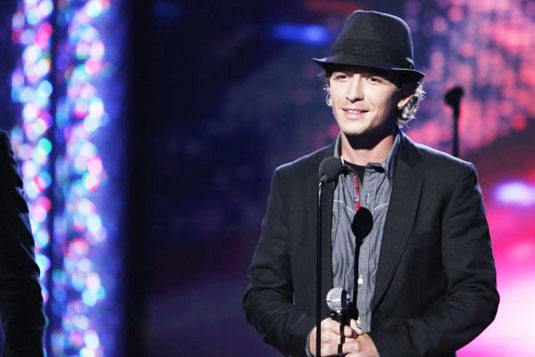 The top ten contestants on America's Got Talent were about as diverse as a group of entertainers can get—from musicians to magicians and black-light performance artists to ballroom dancers. But each one had a tug-at-the-heartstrings story that added up to big votes in the results shows.

We met all of the finalists last week and heard their tales of Cystic Fibrosis and hard-knock lives in the bad parts of town. But one story that stood out to us was singer/songwriter Michael Grimm's. The 30-year-old musician plays what he calls "Mississippi River Music... New Orleans funk to Memphis soul."

At the age of four, Michael was saved from a life living in the Mississippi welfare system. He said, "My grandmother wasn't gonna let that happen. She took my sister and I, and raised us. She put clothes on our back, shoes on our feet, and [gave us] good meals to eat, and [took us to] church every Sunday."

He continued, "She would play the piano in church. She inspired me musically. That's were I got my passion in music. I owe it all to my grandmother."

His grandparents home, the one he was raised in, was destroyed by Katrina in 2005. Michael explained, "She had to move out to another county... and she just wants to move back so bad. She lives in a little trailer now back in the woods, literally. You take this dirt road and it dead ends right at her trailer—pot holes everywhere."

Michael's main reason for wanting to win AGT is to have the money to buy his grandmother a proper home. He declared, "I want to get her out of that situation. So no matter what happens here, I'm getting her out of there."

We're hoping win or lose "Mama Laura" gets the house she deserves.
Posted by Pop Culture Passionistas at 10:00 AM