Anna and Patryk: Danced Their Hearts Out 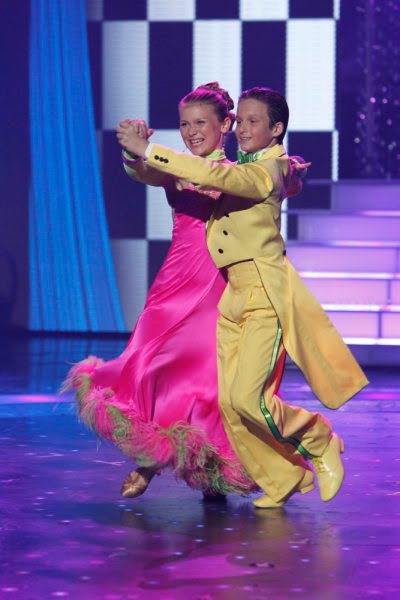 12-year-old Anna Kaczmarski and Patryk Ploszay are cute as a button and talented far beyond their years. But when the ballroom dancers were called onto the America’s Got Talent stage alongside Jackie Evancho, they wore the serious expressions of grown-ups who were already aware of their impending doom.

Surely Anna and Patryk have indeed got talent. But 10-year-old Evancho, was destined for the finals the second she opened her tiny mouth and a 200-pound opera singer’s voice rang out.

So as Anna and Patryk stood, poised but bracing themselves for the inevitable news—Jackie would be moving forward and they were going home.

With all the strength of the 35-year-old that we’re convinced lives in the Anna suit, they thanked America and managed to get off stage tear-free. We were impressed.

In an interview we did with them last week, they were clear that they were there to win. Anna explained, “Well, we really do hope that we win but in our future we would like to be professional dancers on Dancing with the Stars. Definitely finish school, finish college. But it would be really great to win this show. It can’t get any better than that. It would be the best thing in our lives.”

Okay, so they didn’t take home the ultimate title, but Anna and Patryk should be proud. At a very young age, they took one giant step to achieving their master plan. Anna continued, “We didn’t even expect ourselves to make it here to the top ten. We just had a goal to at least be on television one time—to at least make it through to the live show one time.”

Not bad to tick one giant item off your to do list when you’re just a tween. We have a feeling that there’ll be a check mark next to that Dancing with the Stars action item some day, too.