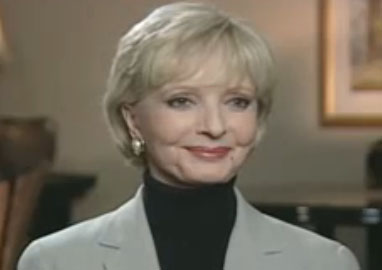 Photo Courtesy of the Archive of American Television

Florence Henderson and Corky Ballas (now known as Team Florky) set out to prove a point on last night's episode of Dancing with the Stars. Flo said, "I'm not just here to be the older, comic relief. I want to show these young comeptitors that I can dance."

And she sure showed them. Team Florky Quick Stepped around that dance floor, with grace and elegance, barely breaking a sweat. Seems to us that Mrs. Brady got her wish to be "thought of as a contender."

Although Florence said she doesn't want people to think of her as the 76-year-old who can barely walk, Judge Carrie Anne Inaba said, "You are a 76-year-old and it's incredible that you are out there dancing with such ease."

Florky's dance left them in the lower-middle of the pack with a score of 19. Three other contestants (Margaret Cho, The Situation, and Michel Bolton) landed below them on the leaderboard. Of course, anything can happen once the audience votes are considered. So will Florence make the cut?

Len Goodman commented, "Your age has no bearing on how I feel... I judge the dancing... and I give a comment as to whether I think people should come back. And on that performance, I'll see you next week."

We agree with Len, that FloHen will survive to dance another day.