Jim Parsons Made a Big Bang at the 2010 Emmy Awards 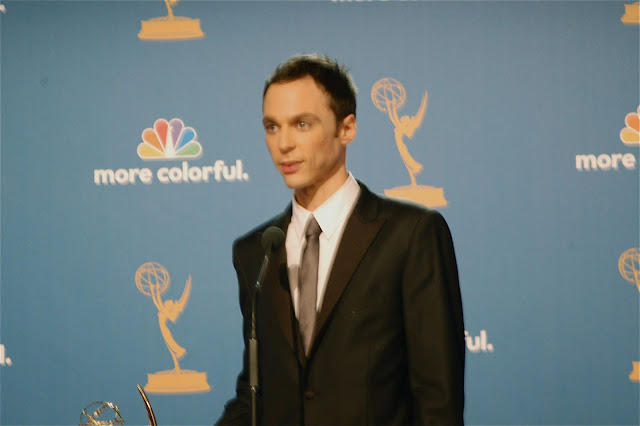 . We’ve heard good things and chuckled a bit at the few minutes we’ve watched. But we just never connected to the characters or the storylines.

So, when Jim Parsons beat some of our favorite Outstanding Actor contenders at the Emmy Awards this year we were shocked. We mean, seriously, could he really be funnier than Larry David, Steve Carell, Tony Shalhoub, or Alec Baldwin? And surely, he can’t have the singing chops of Glee

But something magical happened in the pressroom at the Primetime Emmys. Jim Parsons won us over. He had an effortless charm and an affection for his character, Sheldon Cooper, that was nothing short of infectious.

And, it turns out, he can sing, too, as his evidenced in this clip of Jim recreating his very first role—that of the Kolokolo bird in his school pageant version of Rudyard Kipling’s The Elephant’s Child. See this special command performance and clips of him discussing his favorite TV nerds and how it felt to win an Emmy.

Catch the season premiere of The Big Bang Theory as it moves to Thursdays at 8:00 PM on CBS.


Jim Parsons on His First Role

Jim Parsons on Winning an Emmy for "The Big Bang Theory"