The Jury's Still Out on Outsourced 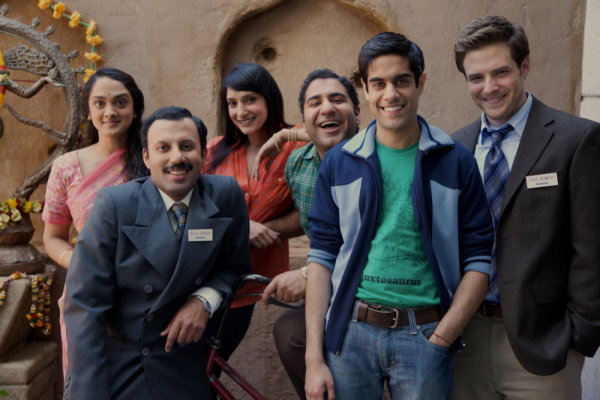 NBC's new sitcom Outsourced premiered on September 23 to mixed reviews. Apparently the network has high hopes for the show, adding it to its what use to be known as the "Must See TV" Thursday night line-up. The traditional hit-making comedy block was the Peacock's plume in the '90s with shows like Friends

So Outsourced has big shoes to fill, wedged between current tried and true NBC ratings-winners like Community

. It should get a built in audience, but the jury is still out on whether they will become loyal fans or just bide their time until Parks and Recreation

We think Outsourced is worth a shot. It definitely has a new spin on the workplace sitcom—a company that has moved its call center to Mumbai, India. The cast is made up of relative U.S. television newcomers including Ben Rappaport, Anisha Nagarajan, and Sacha Dhawan. We spoke with them recently about how they got cast on the show, if they saw the original movie

, and how Outsourced will stand out from other office sitcoms.

Check out Outsourced on Thursdays at 9:30 PM on NBC.


OutSourced Cast Discuss Getting Cast on the Show

OutSourced Cast Discuss Standing Out from Other Workplace Sitcoms

For other celebrity interviews check out:
Piper Perabo Takes on Her First TV Role
Jimmy Smits is an Outlaw