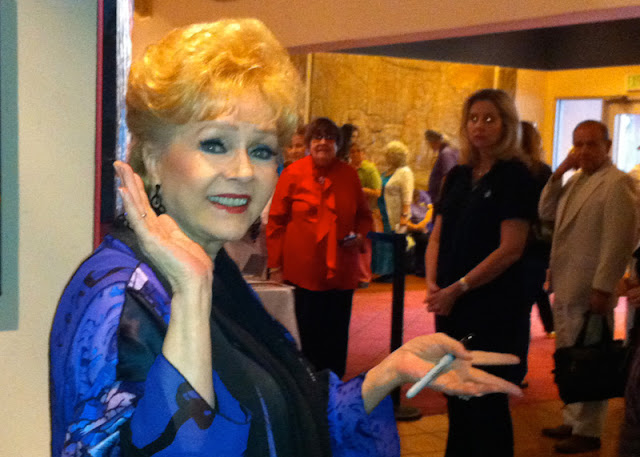 We’ve been fortunate lately to find ourselves basking in pop culture goodness—the Emmys, book signings by Molly Ringwald and Allison Arngrim, even jury duty orientation with Judge Lance Ito. But on the Richter scale of legendary celebrity, few create a bigger ripple than Debbie Reynolds. So yesterday was especially good. We were able to see Ms. Reynolds in her one-woman show, Alive and Fabulous, at the El Portal Theatre in Burbank adjacent North Hollywood, California—an opportunity that seems all the richer this morning given the news of Tony Curtis’ death.

Let us start by saying that she was as sparkly and delightful as we had expected. She dazzled in a head-to-toe glittery gold gown (and matching jacket) for the first act. And after intermission, returned in a shimmery blue pantsuit. D’lovely.

And she brought what the audience came to see. A whole lot of song, a little bit of dance, and a dash of shtick here and there. She talked and sang us through some clips of her career highlights including The Tender Trap

(she said Sinatra was a good kisser), The Unsinkable Molly Brown

(which she called her favorite film), and Will and Grace

(to connect with the members of the audience under 50).

. We must admit that we shed a tear watching 78-year-old Debbie belt out “Good Morning” with her 17-year-old self, Gene Kelly, and Donald O’Connor. And we learned something we never knew—Debbie had never danced before that film, and yet she held her own with two of the greatest tap legends in history.

Much like her daughter, outspoken comedic author/actress Carrie Fisher, she didn’t shy away from some of the gory details of her personal life. We wondered if she’d avoid any mention of her ex-husband Eddie Fisher, who passed away last week. But she got it out of the way early in the show instead, joking, “The reason, Connie Stevens, I mentioned her today is, we married the same schmuck. God rest his soul… He’s gone on to a better place.”

But then it was back to the singing… she covered “Grandpa (Tell Me ‘Bout the Good Old Days)” by the Judds, crooned a Judy Garland medley, and belted out “I Love a Piano

.” She even did a rap version of “Boop Boop Diddim Daddum Waddum Choo.” Really. Could we make that up?

Oh, and there were impressions, too. Jimmy Stewart, Mae West, and even Barbra Streisand—wig, fake nose, and all. Good times.

She wrapped up the show with, as she put it, her only chart topping number—“Tammy

.” Debbie quipped, “Some people have medleys of hits. This will just take a minute.”

Of course, being the consummate show woman, the act didn’t end there. Debbie emerged in the lobby. There she chatted briefly with Hollywood royalty (actor Glenn Ford’s son Peter), gave a quick hello to a fellow actress (Monica Horan from Everybody Loves Raymond

), and shook hands with those of us who were lucky to be in her path. And then she sat and signed autographs for her adoring fans. 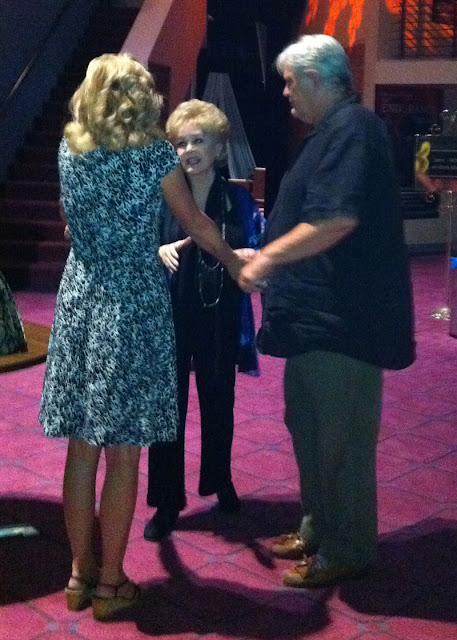 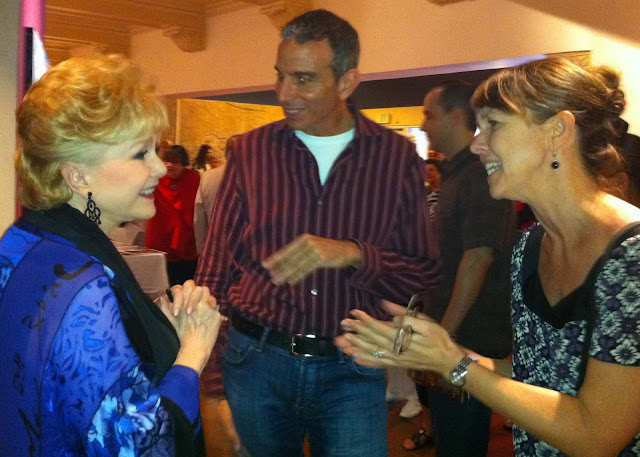 
Gorgeous and charming until the very end. Debbie proved that she will always be, in the words of Lina Lamont from Singing in the Rain

, “a shimmering, glowing star in the cinema firmament.”

The show runs through October 3rd. For tickets call 818-508-4200 or visit the El Portal Theatre website.