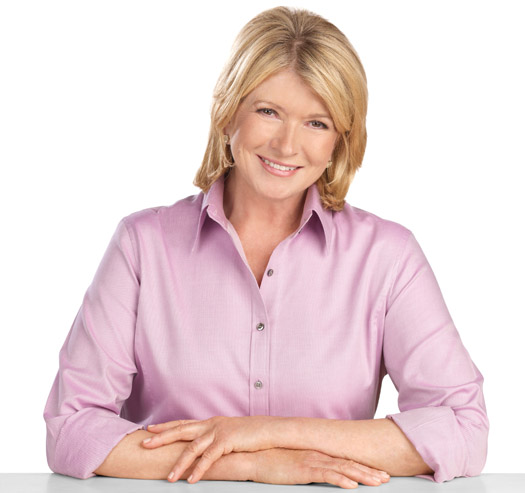 Martha Stewart's plan to beat Oprah Winfrey to world domination started this week. While Miss O. is milking the last season of her talk show, giving away trips to Australia, and announcing left and right new series for her upcoming OWN Network, Martha is quietly slipping into place.

Stewart is turning the Hallmark channel into her own kingdom without changing the call letters to MSN (that's already taken anyway) with eight hours of daytime programming Monday through Friday.

To kick it off, Monday morning saw the premiere of the sixth season of The Martha Stewart Show on its new network. The Emmy-winning series will air not once, not twice, but three times a day on Hallmark.


Next up is Martha's daughter Alexis Stewart and co-host Jennifer Koppelman Hutt on their own hour-long talk show, Whatever With Alexis & Jennifer. The irreverent daytime fare they call "so not your mother's talk show" has already included guests like Paula Abdul, Rosie O'Donnell, and Peter Facinelli from Twilight.

The rest of the day is rounded out with Everyday Food (based on Martha's magazine of the same name), four episodes of From Martha's Kitchen (Stewart presents guests chefs and worldwide cuisines), a half-hour of From Martha's Garden (tips and techniques for acquiring Martha's green thumb), and lastly, From Martha's Home (the queen's decorating, crafts, and home improvement ideas).

And not to be outdone by Oprah, on Sunday, September 19th, Martha debuts the first of her primetime interview specials. Martha Stewart Presents: The Women Who Dress America features interviews with top designers Donna Karan, Diane Von Furstenberg, Tory Burch, and Jenna Lyons.

Martha is poised and ready. Sure there are the naysayers who never forgave her for her stint in that tacky orange jumpsuit, but we still think she rocks. And we'd like to see her stealth plan for world domination succeed.


For other celebrity interviews check out:
An Interview with The 19th Wife's Chyler Leigh
Tim Gunn Discusses Project Runway Season 8