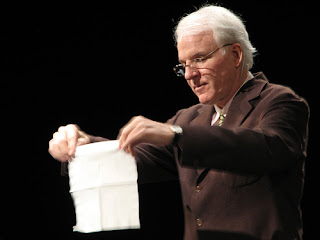 By Whistling in the Dark/Yaffa Phillips

Steve Martin is always funny. He was hilarious as a stand-up doing his Let’s Get Small and “Well eeeexxxxcccccuuuuuuuusssseeeeee me” bits back in the day. He was hysterical in movies like The Jerk

and The Man With Two Brains

. He wrote amusing plays like Picasso at the Lapin Agile

So it was only a matter of time before Steve Martin would get silly on Twitter. He just signed up on September 10 and he’s already enlisted the help of 100 monkeys to keep messages pouring out to almost 170,000 followers.

Yes, we said monkeys. They’re getting out important thoughts like:

And they’re proving to be lucrative for Steve who Tweeted:

Of course, he’s managed to get himself into a bit of trouble, too. According to his Tweets, he told his wife he’s writing a lucrative screenplay called Po’ Boys for Dinner rather than wasting his time on the social networking site. In order to help uphold the ruse, he’s asked that if you see him on the street you shout out, “How’s the screenplay going, Steve?” and give him a thumbs up.

If you haven’t been keeping up with the action packed kick of off SteveMartinToGo on Twitter yet, don’t feel overwhelmed. He’s been kind enough to post a brief recap of the first ten days. It’s worth checking out and seeing for yourself that Steve is still one wild and crazy guy.

Shatner Takes on Comedy in $#*! My Dad Says