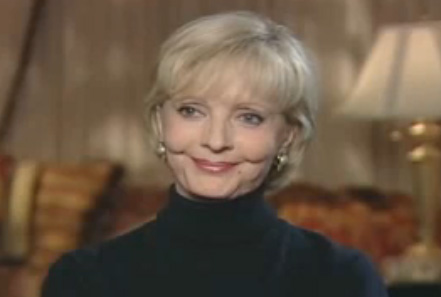 Photo by the Archive of American Television


We have to admit we were a little embarrassed to watch Mrs. Brady bump and grind on the dance floor last night during week four of Dancing with the Stars. After all, she's America's mom. And while she may have been the first TV housewife to wear sexy nightgowns, she was still the wholesome mother of six to us.

We may have used those "Not Appropriate" signs just a little bit more than Corky and Florence's kids, Mark and Barbara.

Florence Henderson and Corky Ballas' sultry Rumba performed to the Beatles' "Yesterday" landed them, once again, in the middle of the pack with 35 points. Personally, we think Florky should have received a better score than 18 for the performance, which was charming, elegant, and sizzling hot. Even host Tom Bergeron called it the "get a room dance."

Yet with Chris Knight (aka Peter Brady) and his wife Adrianne Curry sitting proudly on the sidelines, and millions of Brady Bunch

fans at home cheering her on, it looks like Florky will Cuban Walk their way right into week five.

Check out this interview from the Archive of American Television of Florence talking about developing Carol Brady and wearing those flirty pajamas on the show.