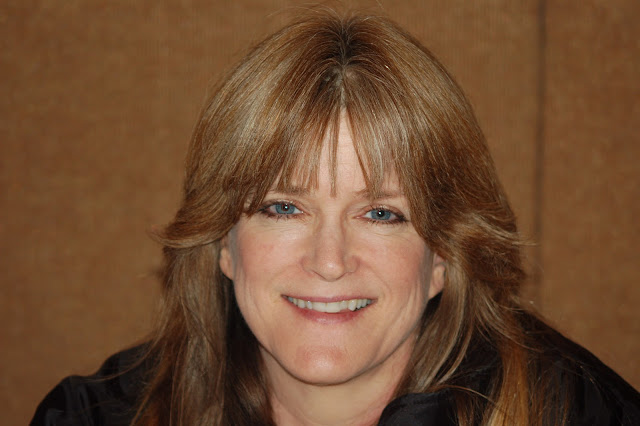 
Much to our personal joy, it was TV theme song week on Dancing with the Stars last night. And while we dreamed of a cha cha to José Feliciano’s Chico and the Man tune, we were satisfied with Kyle and Lacey’s adorable foxtrot to the Charlie’s Angels

tune but since “Love and Marriage” is an old standard it seemed a tiny bit of a stretch. But, of course, we were thrilled when Florence and Corky danced to, what else? The theme from The Brady Bunch

To sweeten the retro pot, Flo’s old co-star and TV son Barry Williams stopped by rehearsals to lend some moral support. And then, with her hair styled in the perfect Carol Brady flip, she ripped off her plaid house coat and tripped the light fantastic with her partner.

Carrie Ann loved her elegant tango, while Bruno was a bit more critical. But when Florence reminded him, “You try doing the tango to the Brady Bunch theme.” Bruno simply replied, “Touché.”

We had our own brush with Brady greatness this week when we chatted with Susan Olsen who played Cindy at the Hollywood Xpo. Naturally, the conversation turned to her TV mom’s current gig on the dancing show.

Susan was in the audience with Flo’s daughter Barbara recently and explained, “She and I just turned into worry warts.” After all, as easy as it is to compare Henderson to her Dancing co-stars, people often forget that she’s the oldest competitor by far, Susan reminded us, “Jennifer Grey’s only 50. I mean, jeez, 76 years old. If Corky drops her on one of those dips, she could break a hip.”

Susan was in the audience the night of Sarah Palin’s much-debated visit. And when we asked her about the now legendary audience-eruption, she clarified, “Everybody on my Facebook page was going, ‘Why were people booing Sarah?’ I’m like, ‘Nobody would have done that. She was there as a mother. She wasn’t there as a politician.’”

Besides, we all know who the real star in the crowd was that night. Susan told us, “Some journalist who I wanted to write to and say, ‘I love you,’ they said, ‘Oh, to heck with Sarah Palin. Did you see Susan Oleson was in the audience?’”

And of course, we had to ask the obvious question—would Susan do DWTS if they asked her to? “I would, only because they throw buckets of money at you,” she joked adding, “I really would… It’s such an adventure and you get in shape. It’s so grueling. I would want to accept that kind of a challenge. It would be sort of life changing.”

We had an idea that we thought might benefit Oleson and her whole TV family—what about an all Brady season of DWTS? She was one step ahead of us revealing, “I suggested that one year.” But since producers didn’t seem to bite at that one, we added a twist—Bradys vs. Partridges. But who would win?

Susan didn’t hesitate to wager, “We would definitely wipe the floor with them… We beat the Waltons in celebrity bowling. We’re a force to be reckoned with.”


See photos of the Xpo in our Facebook album.

Our Interview with Mary Ann, Cissy, and Nellie

Days of Our Lives Turns 45