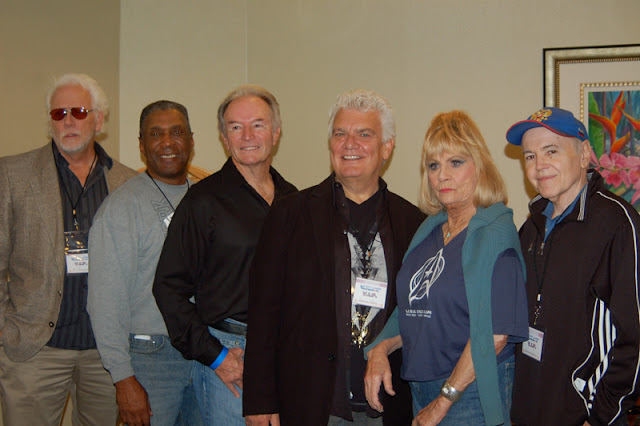 You didn’t have to be the world’s biggest Star Trek fan to enjoy the cast reunion at the recent Hollywood Xpo at the Burbank-adjacent Universal City Hilton. A group of cast members gathered there on Friday in support of the three-part web series Star Trek: Of Gods and Generals.

Among the franchise stars, who were present at the convention on Friday were J.G. Hertzler, Herb Jefferson, William Wellman, Daamen Krall, Grace Lee Whitney, Nichelle Nichols, and Walter Koenig. Also on hand was Tim Russ, who starred in Of Gods and Generals as Tuvok and also directed the video.

Walter Koenig, who has portrayed Pavel Chekov for decades, was leery of signing on to the Star Trek project. He explained, “Initially I wasn’t that enthusiastic about doing Chekov yet again in a situation where there wasn’t going to be any remunerative side to it. And I thought, ‘I’ve already done it.’… And then it turns out that it was really… great fun. It wasn’t just Chekov, it was really another character, and one with considerable emotional depth. And so I had a good time. I had a good time doing it. It was a very positive experience.”

Some of his co-stars were a bit more willing to hop on board from the start. Grace Lee Whitney, who played Janice Rand on the original series, explained, “We wanted to do it all along. Way back before it got going this was in our minds to do it on the Internet… The only problem was we couldn’t get contracts… to keep it going and everything. It kind of got stopped in its tracks.”

Among the perks of being in Of Gods and Generals was the chance to reconnect with old friends. As Nichelle Nichols, who plays Uhura told the crowd, “One other thing I didn’t expect was when I turned around and saw Grace Lee Whitney there and, of course, it was a love fest. We were just falling into each other’s arms.”

But the good did come with the bad as J.G. Hertzler pointed out, “I’ve described it as the worst working conditions I’ve ever seen in this business and the most fun I’ve ever had. They wouldn’t normally go together. But it was 105 degrees in an old brick building that should have been demolished years ago.”

That wasn’t his only complaint. He shared one more disappointment, “They didn’t have was enough Klingons. A few more Klingons, it would have been perfect.”

The personal highlight of the event for us was a brief conversation we had in the hallway with Koenig following the press conference. He told us he just taped an episode of Shatner’s Raw Nerve with his old co-star Bill. Koenig told us he enjoyed the experience saying that even though the exchange was direct and not necessarily “polite,” that Shatner was “quite gracious” to him.

That’s a reunion we can’t wait to see.

See our slideshow of photos from the Star Trek reunion at the Hollywood Xpo.

This is Not the Star Wars We’re Looking For