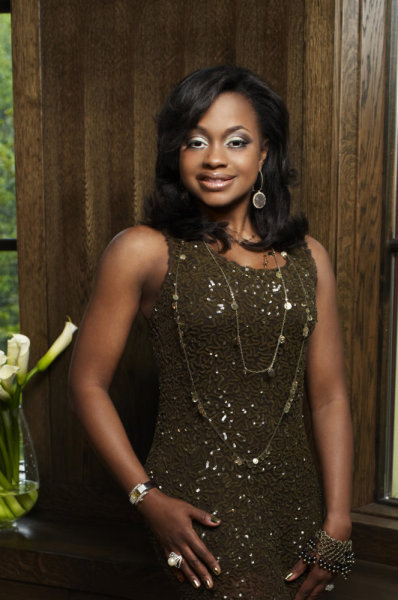 Producers are shaking things up on The Real Housewives of Atlanta

this season. Lisa Wu-Hartwell is leaving the show and being replaced by two new ladies—Cynthia Bailey and Phaedra Parks.

Phaedra is coming with more than her share of controversy. She’ a high powered entertainment attorney who has handled cases for stars like Bobby Brown and Jermain Dupri. She’s pregnant with her first baby. And, she’s married to a convicted white collar criminal named Apollo.

In a recent conference call interview Phaedra talked about joining the cast, being a southern Belle, motherhood, and the blogger buzz surrounding her husband’s past. Read what she had to say after the break.

The Real Housewives of Atlanta airs on Mondays at 9:00 PM PST/8:00 PM Central on Bravo.


Q: You're coming onto the show now. What made you want to be a part of it and are you prepared for the scrutiny that comes with it?

PHAEDRA: Well I'm always up for a challenge and so I saw it as being a wonderful challenge, and… a great new experience. So like I told someone else, "I'm in the water, so I've just got to enjoy the swim." And it's been fun.

So I'm enjoying the ride and what comes with it, honey. Life gives you poop sometimes but that's why we have toilet tissue so, I'm ready.

Q: Had you been a fan of the show and watched it?

PHAEDRA: I really didn't watch it a lot. I had seen it obviously but I just thought it was a wonderful opportunity. I was pregnant and I just thought, that was a very interesting time in my life. And I didn't have a problem sharing it with the world. So it was nice to be able to share some very intimate moments. And hopefully you all enjoy it as well.

Q: How were you approached about the show?

So when they asked me, I wasn't really sure if I would do it. But I just had to really, think it out and be very methodical about if it was the right time, and how it fit into my life at that point in time.

Q: What was your initial attraction to do the show?

PHAEDRA: Well, I had already been in TV doing other projects and so most of my experience had been behind the scenes in production, as a producer and making things happen and being in the background. And so it's always a challenge for me to do something new.

And being an attorney, I'm used to being in control. And so letting someone else have control of me was definitely a challenge. But I was up for the challenge and I thought it would be great to have the diversity in my life and say, "Hey, I've done it."

No, but so that was my thought, is to really give myself the full gambit [sic] of knowing what it's like to be in front of the camera as well as being behind the scenes. And this season has definitely allowed me to see both… angles.

Q: What was your impression of the cast on the first day of filming? And did your opinion change when you stopped filming?

PHAEDRA: Well, I guess the first time that I was in a room with everyone, it was a little stressful, because you'll see, some things had happened at another event prior to that. So I wasn't really sure, what was really going on and I wasn't sure of, how they would receive me.

But after we finished filming, I think and we do several episodes, together and several actual meetings together. Everyone is really, they're all great ladies… Everyone's very different. But that's what makes it such a great show because you've got a hodgepodge of characters that make a great gumbo.

Q: You stressed the importance of being a Southern Belle constantly in the progression of the show,  so we wanted to know if this was something that was essential for you coming into the show.

But being a Southern Belle, that's just because I'm from the South and I adore the South. And I think there's no place better in the world than the South.

And so I'm very happy and excited about my heritage and being from the South. And I think some people, don't see the South as I see it. And so being a Southern Belle is something that I wear proudly.

Q: There's been much controversy surrounding your marriage to your husband. So how have you dealt with the comments and the negativity?

PHAEDRA: Well at the end of the day, people are always going to talk, but what I know is that I know who my husband is and I know who I am, and I know that I love him and we have a wonderful marriage. And now we've got a beautiful family together.

And so people love to talk. That's why God gave us, I guess, lips and tongues and teeth. But it doesn't change what we know about each other. And it doesn't stop me from loving him any more or less.

So you just have to do what you want to do and be okay with your decisions, because I'm the only person that gets to sleep with him. But I'm sure a lot of people would like to… So yes, he's my man and I love him. And so I will stand by him no matter what.

Q: The whole scrutiny about your husband being in prison, has it taken its toll on your family?

PHAEDRA: Well, all of my family didn't know prior to us getting married, but thanks to… bloggers and the media now everyone in our family knows. I'm from a very religious family that's very conservative. And a very political family that's well-known.

And so I wanted people to judge my husband for his character and not his past, because he's a great person. And your past does not dictate your future. And I believe in redemption. And so I made my decision when I decided to marry him, based on the person I knew he was and knew he would be, not who he had been and where we was coming from.

So both of our families, my family was a little shocked when they found out through the press. And his family, obviously, they knew. It bothers him that he was obviously getting so much flack because he had served his time.

And under our laws obviously we have a system where if you do what you're supposed to do you should be able to return to society and be made whole—not constantly scrutinized for something that happened in the past.

But unfortunately, being a human and everyone else being in human nature, allows people to always criticize and reflect on things, even though they might have a few things in their background as well.

But we are both very strong people and our relationship is built on a solid foundation and a lot of love. And so we're definitely, moving forward and enjoying our life together despite anything that any blogger has posted.

Q: There’s a lot of controversy around your husband but when they approached you about the show did you consult him before accepting the project and how did he feel about it?

PHAEDRA: Well, my husband is very supportive of me and so I did consult with him. And he's my backbone and so he said, "If that's what you want to do, we'll do it together. Whatever happens it happens."

So he's always been very supportive of me and my endeavors and so that's one of the reasons that I fell in love with him, because he does support me and we are team. And we have a true partnership. So yes, he definitely is very supportive even now.

PHAEDRA: It has been really awesome… I never knew that I would be this excited and have this much joy waking up during the night with a baby.

But my baby is absolutely fabulous. He's got a great little personality. He's real laid back—unlike me and my husband—so that's a plus. So yes, he's a baby-doll. He's truly a baby-doll.

Q: What's been your biggest challenge of being a new mom and also having a career at the same time?

PHAEDRA: Time management. I think any time a woman becomes a mom, especially with a little baby, and this is my first child, it's very hard to pull away from that child and to go back to work. And I've returned to work and it's always a challenge during the day because I'm constantly thinking about my baby.

And being an attorney, it's a very hectic profession in itself and it's very busy. My job is extremely busy and really stressful. So the time management gets me a lot because I am a trial attorney and so I have to prepare for trials and that does cut into the time that I have with my, my beautiful baby.

Kim Zolciak—Our Not So Guilty Pleasure