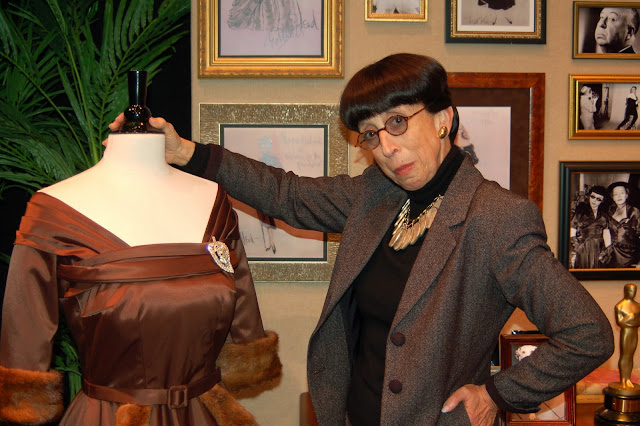 Costume designer extraordinaire, Edith Head, is alive and well and living in Burbank. At least, that is, through this weekend when the run of A Conversation with Edith Head, a one-woman show about the costumer, comes to an end. Susan Claassen has been bringing Head to life at the El Portal Theatre in North Hollywood since September 23. If you have not had a chance to see the show, call for tickets now, before it closes on October 24.

Claassen, an actress/writer/director/producer, began her journey with Edith Head nine years ago, when she was watching the Biography channel. She was astounded at the physical similarity she bore to the Hollywood legend and thought her story was fascinating. In a recent interview Susan told us, "That was the first impetus to explore the possibility."

After researching a bit and contacting the Motion Picture and Television Fund, who handle Head's estate, she tracked down Paddy Calistro author of the biography, Edith Head's Hollywood

. Calistro wrote the book in 1983, two years after the designer's death. Susan and Paddy began collaborating on the show immediately.

The play takes place on a beautifully designed set framed by two stunning Head rerpoductions—Elizabeth Taylor's white, tulle, 19-inch waist dress from A Place in the Sun and the brown Bette Davis off-the shoulder gown from All About Eve

. During the show audiences discover that that brown dress was not designed as an off-the-shoulder look, but with no time for a fitting, Ms. Davis realized it looked better that way.

Also on the set are two replica Oscars and countless sketches and photos from the artist's almost 60-year career.  Head won eight Academy Awards in her career, more than any other woman in movie history,  and with over 1,100 films under her proverbial belt, she is quite possibly one of the most prolific costumers that ever lived. Claassen quoted Head, "I may not have been the greatest designer, but I learned early on there was no reason I couldn't be the most celebrated."

With her tiny frame, dark round glasses, fitted suit, and chignon (a hairpiece designed by Head-protege Bob Mackies' wigmaker Renate E. Leuschner), Claassen embodies the costumer as she takes the stage to converse with her audience. The show takes on a new life each performance because it is partly based on interaction with the audience who submit questions for Edith before the play begins.

But be prepared. If your question is chosen, Head requires you to stand in the theater and proceeds to critique your ensemble. Thank goodness, we had accessorized the night we went to the show.


Susan said of the audience, "People really get into wanting to know certain things… If anyone can give you the history of Hollywood from an insider's point of view it was Edith."

And because the questions are new each night, Claassen needs to be 100% aware of her material. She said, "I'm never quite sure what the questions will be, but Edith is always aware of her audience… I research every detail I can so that it's as rich an experience for those who know a lot, as well as for those that don't and just want to."

She went on to say, "I know I'm not Edith. And the audience knows I'm not Edith Head. But there's a shared moment. I'm very blessed that audiences go with that and everybody can remember a film they saw, or a moment they had, or the first time they saw 'Gowns by Edith Head' or the first time they saw Grace Kelly in the gorgeous gown, or Elizabeth Taylor in the A Place in the Sun dress. And it brings back something that in some way touched them. And that is a connection that I just treasure."

The show takes place in 1981, shortly before Edith's death while she was working on her last film, Dead Men Don’t Wear Plaid. That film was the button to a career that had the widest range you could imagine—from Grace Kelly to Steve Martin, Hitchcock to Airport

. The breadth of her work was astounding. Susan remarked, "Edith was so smart. She was chameleon-like... The scope of what Edith did—everything from Jerry Lewis and Dean Martin to Marlene Dietrich in Witness for the Prosecution

. It was a spectrum. She always said that with every great designer, the costumes really aren't noticed, because what they are is really furthering the story—unless that furthers the story with a standout like in To Catch a Thief

, that gold dress that Grace Kelly walks down in."

Edith was such a well-known and respected designer that almost everyone in Hollywood worked with her at one point or another. Claassen told us, "A Conversation with Edith Head is lovely to be able to do because we can almost do it anywhere, because Edith really was everywhere. She would go out on interviews, and she would do fashion shows, and she would write for Photoplay and all the magazines and there really was no other person working in the industry who brought the attention to what a costume designer did… Literally everywhere I go, somebody has known her, or she came in and did a fashion show. Be it in Houston. Be it in London."

Some of those people have even been in the audience for Claassen's show. Norman Lear and Barbara Rush, who both worked with Head on Come Blow Your Horn, came to see Susan breath new life into their peer. Claassen told us that Jean-Pierre Dorleac, a costume designer who was one of Edith's contemporaries, came to opening night and told her, "I just felt I was with my friend again."

Head did have many friends, some famous and some behind the scenes people like herself. Claassen quoted Edith as saying, "Most people lead one life, but I'm two separate people with two distinct lifestyles. At work I'm a disciplined businesswoman. I wear simple clothes. I have no intention of competing with the stars I'm dressing. But at home it's a different story."

So aside from the obvious physical likeness, how is Susan Claassen like Edith Head and how is she different? Cluassen replied, "Probably the similarity is the tenacity of being able to stay in the business and be in a very collaborative business for so long. Different? Edith wasn't known for giving credit all the way around. I tend to give a lot of credit to a lot of people."

And speaking of credit, the play deals with some of the more controversial elements of Head's career, such as her claims to designs that may not have been hers, and her sometimes-harsh nature. But Claassen says the most surprising thing about Edith is "her vulnerability… She said that she was probably a better diplomat than a designer… We all have that vulnerable part."

The actress also told us that one benefit to creating the show is that she gets to spread the word of Edith Head. She stated, "It's a fascinating journey and it is such a privilege to keep this legacy alive. I feel like I'm reintroducing her to some who have never heard, maybe. There is not a day that goes by that I don't get an Edith Head Google Alert. Not about the show, but about Edith. 'Edith Head Is My Hero' or 'She's an Inspiration for Me' or 'The Ten Top Oscar Dresses.' Edith's designs are always in there."

Susan enjoys connecting with young design students and teaching them about Head. She acknowledges that the business is so different than it was in Edith's day, but she wants students, "to understand what Edith did and how she paved the way, because it was definitely a boys club when she came in. She played it better than anyone."

With over 1,100 films, it is nearly impossible for any Edith Head fan to choose a favorite, but Susan was able to narrow it down saying, "I love all of the costumes, the whole costume design plot in Rear Window

. I think it's magnificent. It was the combination that was fabulous. That and To Catch a Thief, brilliant."

Susan wants people to walk away from the show with one message about Edith Head, "That she paved the way. She did what no other woman could do, but she was indeed a person with all the plusses, the minuses. And that she was a real person in there... Some people, found her domineering, but inside was a real person who really devoted her life to the industry and to really cared about what she did."

She continued, "She was women with a great heart, a great sense of humor, and a great, great determination."

And so if the author of A Conversation with Edith Head could, in fact, have a conversation with the great costumer, what would she say? Claassen's answer was simple, "I would thank her for enriching my life."

Check out A Conversation with Edith Head at the El Portal Theatre, 5269 Lanksershim Blvd., North Hollywood through October 24. For more information visit their website or call 866-811-4111.

For other theater storis check out:
Debbie Reynolds Dazzles in Alive and Fabulous
Florence Henderson Tries to Pull a Betty White