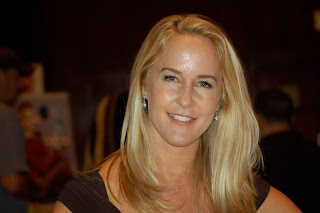 This past weekend at the Hilton Universal City, hundreds of stars gathered to meet and greet fans, and reunite with old friends at the HollywoodXpo. For Trekkies the highlight of the event was the Star Trek: Of Gods and Men Internet series cast reunion. Personally, we preferred a few other star spottings—The Brady Bunch

' Erin Moran, and Lost in Space

We asked some of the celebrities why they come to these kinds of events. Replies ranged from selfless charitable giving to a deep respect for their fans to a simple need to earn some cash.

We asked Susan Olsen, who played Cindy (the youngest one in curls) on The Brady Bunch, why she likes to do these kind of shows and she joked, "I actually don't. I really don't like these things." She then went on to explain, "I never wanted to do autograph shows because I thought they were kind of pathetic. But they've totally changed though since I formed that opinion. The first autograph show I did, I was seated only a few feet away from Malcolm McDowell, who is one of my favorite actors of all time and I thought 'OK. I guess I'm not too cool for this.'"

Susan told us she was there to raise money for her charity, preciouspaws.org, a cat rescue organization for which she sits on the board of directors. Every picture sold and every autograph granted can help save the life of an abandoned little kitten.

Some other stars in attendance had slightly less selfless reasons for appearing. Suzie Plakson from Star Trek: Enterprise

and How I Met Your Mother

confessed, "I have to be blunt... I think it's an amazing experience to connect with fans... but in truth a lot of it's because I need to pay bills like other people. Being an actor it's a really lovely, wonderful opportunity to be able to do it in that way... It's been a part of a journey I never would have chosen, but I'm really glad. Sometimes I think the universe withholds when it wants to teach you all sorts of fascinating lessons."

who realizes the importance of having loyal followers remarked, "I think it's always important to connect with your fans because if you don't have fans you're not working."

She went on to say that she also likes seeing old friends at these events, "It's just fun. It's really a good way to meet... and not only meet new people, new fans, but also reconnect with people you have seen in ions literally that you worked with twenty years ago. It's a good time."

and Call to Glory mirrored that sentiment when she stated, "It's always a reunion, these shows, because it's people you've either worked with, or met, or always wanted to meet. It's fun for us, too."

And as for meeting her fans, Cindy added, "Fans think of us as family... People in stores think they know us, and they do. I just think this is a way for fans to meet their family."

Erin Murphy who played Tabitha on Bewitched commented, "I love coming to events like this. Not only to connect with people who love the show, but also... I'm a fan of other shows so it's really fun seeing the other people. I like the one-on-one connection."

Erin also pondered why some celebrities have negative opinions of these autograph events saying, "I've been to events were celebrities aren't always nice to the people who come and see them. And if that's their only interaction with somebody, it kind of ruins their opinion of the show. And I don't ever want that to happen. I enjoy being a positive face of a great show."

Erin obviously has a deep respect for her early working and for the longevity of her first role. "It's amazing that a show you could make back in the '60s and '70s has held up so well over time and people still love it. So I can't imagine it being negative for anybody."

For other celebrity news and interviews check out:
Our Interview with Mary Ann, Cissy, and Nellie
Celebrities Get Some Doggie Therapy