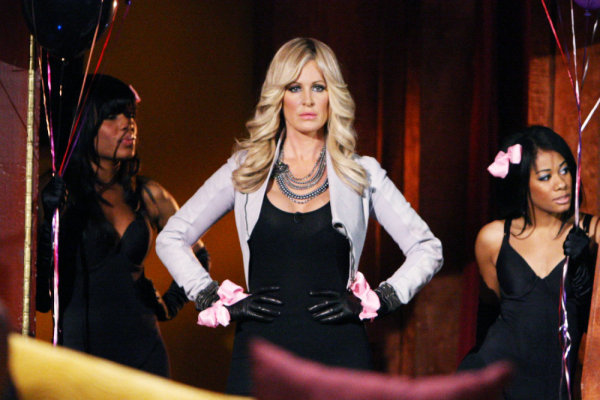 If after two seasons of The Real Housewives of Atlanta, you’re not the least bit fascinated by Kim Zolciak, well then you’re definitely “Tardy for the Party.” We jumped on the curious-about-Kim bandwagon half way through Episode 1 of Bravo’s oh-so-addictive reality train wreck about a gaggle of rich women in the Georgian capital. You may call it a guilty pleasure. We don’t believe any TV goodness to be guilt-worthy.

1. Kim wears a blonde wig. She’s so famous for it, she started her own wig line. Who does that?
2. Kim used to have a mysterious sugar daddy she called Big Poppa. She is now dating a younger man—the Atlanta Falcons’ Kroy Biermann. This storyline is going to play out (deliciously we’re sure) in Season 3.
3. Kim recorded the inexplicable hit “Tardy for the Party” and has a follow-up called “Google Me” that drops today.

Okay, so maybe it doesn’t sound great on paper. But trust us, if you watch her, you won’t be able to turn your eyes away.

We recently spoke to Kim about the show, her wig line, her music career, her love life, and being a single mom. Here’s what she had to say.

Q: This is your third season now with The Real Housewives of Atlanta, how has your life changed?

KIM: My life's really different. I have a new wig. That's Number 1. My hair looks a lot better honey, okay? That's what happens when you have your own wig line.

My life's changed a lot. I used to be able to just go to the grocery store looking a hot mess, and now I really can't do that anymore. Kids—they're older now, so I have one in middle school and she's dealing with the show and the press.

And my personal life's really different. And you'll get to see that kind of unfold this season.

Q: We were wondering when you heard about the cast changes this season if you were excited about them or were you nervous?

KIM: I asked around about Phaedra and Cynthia, and who are they, and that kind of thing. I was never close to Lisa, so I'm not going to miss her. I was so over all the companies she said she owned. So it was fine for me, when she left. But I think they're great additions to the cast. But I wasn't nervous.

Q: Are you worried about the new cast mates stealing the spotlight at all?

KIM: No, I think that we all kind of have our own… of course Phaedra had the baby, that's a big deal. I think everybody has a lot going on this season and a lot changes for people, and life changing experiences.

I think we all kind of have our own personal stuff going on and they're a great addition to the cast. I don't think that anybody's going to steal the spotlight from anybody in general.

Q: Is it true that you’re writing a biography?

Q: Completely over then?

KIM: Yes, completely over. I've been with this person for… five months.

KIM: Thank you. So yes, very happy. You'll get to see that unfold, my personal life change and yes, he's a doll-baby.

Q: Please tell us about your little young buck, Kroy Biermann. Is he really 24 years old?

Q: Please tell us about how to catch a young buck.

KIM: I don't know. People keep calling me a cougar. But I'm 32. He's 25… I've never ever, ever dated somebody younger than me. My ex-husband's five years older.

So I really didn't know his age, nor did I care. But we just have a great connection. We're still together and it's been over five months. So he's just fantastic. I'm really happy. I'm in a great place.

He's great with my girls. And he's not 25, out partying every night and that kind of thing. He's not. He doesn't have that mind frame. And maybe that's why it's worked.

Q: Where exactly did you meet him?

KIM: Oh you'll have to watch the show, girl, and see because… you'll get to see the whole thing from the very, very, very beginning honey.

Q: People online have said that you guys are really dating to increase his cachet on the Atlanta Falcons and get him more publicity?

KIM: Honey, he hates it. He hates the publicity. When it first hit the fan, it was a little stressful for him and I.

He's from Montana. He's not into the press, he's not - in fact I had to do a pick-up with him, filming recently, and he said, "No." He's not going to do anymore on camera. He just doesn't like it.

We're kind of past that now. But… yes I'm 100% positive that he's not into the fame… which I can't really say that about too many other people.

Q: In the preview video for Season 3, you said, "You slept with a woman. Big deal, call it a day and move on." So was it a positive experience for you? And was it something you'd consider doing again?

KIM: Aye, aye, aye. I have no regrets. At the end of the day, I mean, s#*t happens. So I have no regrets…. I don't know that I would do it again. I don't have that answer. I'm really happy in my personal life and I just, it happened and that's it.

At the end of the day Tracy's one in a million. We're great friends and probably always will be. We connected on a music level initially and then there you have it.

Q: Kim, is your music career on hold right now?

KIM: No, my new single “Google Me” drops on October 5. And then I worked with Kandi this season on a show for another song that you get to see unfold this season, as well.

Q: Can you talk about rapping on that track?

KIM: I was actually pretty nervous about rapping on it. One of the songwriters that wrote the lyrics with me said, "I really think you should rap."

So I actually got in the studio, and there's lines you have to redo a couple times if your pitch isn't right or what have you. And I went into the studio, started the rap. The producer jumped out of his seat, the songwriter, my assistant, everybody's like, "Oh my gosh, we have a future rapper."

And I only had to do the rap one time and it was done. And I loved it… It's just a different energy. It's fun. It's catchy. It's kind of like Fergie is glamorous. I'm not comparing it to that, but it's spelling out “Google Me”…  I loved it actually.

Q: And was there anyone in particular that you were channeling?

KIM: No… not really. I don't really listen to rap music. No… I actually, I had the most fun with the rap part of it.

Q: Are you going to be collaborating with anyone in the near future?

KIM: In the future, I am actually. But I'm not working on that now. Like I said, my new song comes out Tuesday and then my other one will unfold. So I'll be working on that while the show's airing.

KIM: Oh, it was so different. I didn't want to do “Tardy for the Party.” Initially when I had shown up at Kandi's house to film that day I had no idea that I was going to be going into the studio doing “Tardy for the Party.” So I was just a wreck over it because I was so humiliated Season 1 that I had no desire to do it Season 2. And if it wasn't for Kandi I never would have.

And now going in and recording “Google Me” was so fun. I've done over 60 appearances since last season, from Ellen to nightclubs… So I'm a lot more confident, I'm more secure with what I'm doing. And I know what I'm doing.

Whereas before I was really just shy… It's like singing in front of a bunch of people, in the car, or singing by yourself. I just had this phobia and I just would not give it my all because I was so scared of what would come out in front of all of these people.

Now… it is like I give it my all. I have nothing to lose at this point, except I have to prove myself. It's a little bit harder.

Q: Have you heard the other songs by the other Housewives, like Danielle or the Countess?

Q: And are you looking into acting at all?

KIM: I did a movie, The Joneses, with Demi Moore and David Duchovny. I was, with Sheree, an extra in that movie. And girl that is some long hours. And I'm used to  reality TV, where you just kind of live your life and they follow you around... that was a lot—till 5:00 am.

So, I'm not sure how I feel about that. Reality seems to be kind of right up my alley right now.

Q: What's it like being the mom of a teenager? Does that make you nervous, knowing that what you were like as a teenager?

KIM: Oh girl, I was wild as hell so… It makes me very nervous. But she's very honest with me. And we have a great relationship. It makes me nervous… I know what's out there.

Brielle… actually made a really big commitment this season on the show. You'll get to see all that play out. And I'm really proud of her and who she is. So I think I'm doing an okay job. But it is a little bit difficult and it's a little uneasy. And I can't believe she's going to be 14. It's incredible. And they deal with a lot more than I even did when I was 14. Being on a show and all this controversy that's surrounding the situation with Tracy and I… it gets to be a little bit difficult.

Q: Could you give us some parenting advice?

KIM: I love my relationship with my girls. I'm very honest with my girls and I have one who's in middle school—she's almost 14. So it's a little bit hard right now. And I think just communication is key. That's like Number 1. Communication and listening, you know? If you don't have those two things, forget it.

Q: Everybody wants to know about your wig line—where can we get it?

KIM: My wig line is available… by custom order only… People can always contact my assistant. And… they're very expensive right now. I'm trying to launch a line for Middle America per se. They're thousands and thousands of dollars right now. And I'm struggling trying to find a hair quality that I like, in the price range of $3 to $600 versus, $3 to $5000. So that's what I'm working on that. And they will be out very soon.