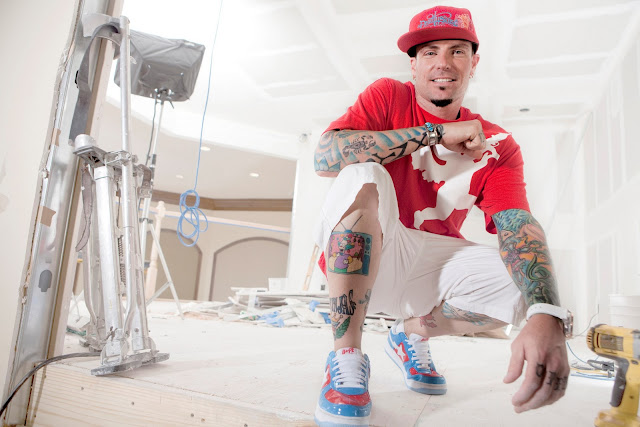 You may or may not know this yet, but Vanilla Ice has his own new TV show. No, it's not an Osbournes

-style series revealing his home life. And it's not a dating show like Brett Michaels' Rock of Love or even a music industry game show to find a new hip hop artist. Vanilla Ice has a home renovation show on DIY Network. Yup. Who would have thought, huh?

The "Ice, Ice, Baby" singer, the first hip hop artist to top the Billboard charts, is flipping houses as a hobby, and he's sharing it with all of us.

The Vanilla Ice Project debuts tonight at 9:00 PM with two back-to-back episodes. And the most surprising part? Ice (or Robert Van Winkle as he's known when not on stage) actually knows what he's doing.

In the first episode he explains that he has lived in Palm Beach, Florida for 25 years and has spent some time studying landscaping. He says, "I was born with a green thumb. I know a lot about trees. I've learned everything about landscaping that I could possibly learn." And from the knowledge he imparts on the premiere episode, we believe him.

For his first project he is completely renovating a 7,000 square foot Palm Beach home. The six bedroom, five bath house has been unoccupied for several years and the singer turned TV Host is going to re-do it from the inside out.

And don't think he just hires a bunch of people and reads from cue cards to describe the process. Ice is in the trenches—driving tractors, digging holes, and knocking down walls. He even confronts an alligator while fixing the sprinkler source in the backyard lake.

Of course, there have to be some hip hop touches, like the LED system he installs in the front yard with a rock concert lighting specialist.

Tune in to The Vanilla Ice Project tonight at 9:00 PM PST/8:00 CENTRAL PM on DIY. You'll be pleasantly surprised. And you might want to stick around after for Rehab Addict. No, not the Dr. Drew kind of the rehab. Historic home rehab with Nicole Curtis. For the DIY addict in all of us.

Posted by Pop Culture Passionistas at 10:00 AM