Jane Fonda Is Back in the Exercise Game 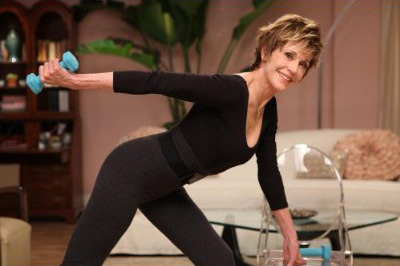 Jane Fonda is back and hotter than ever. For the first time in over 15 years, at the age of 72 (though you'd never know it by looking at her), she is releasing a two DVD set for the senior crowd called Prime Time

. In a recent Facebook chat with viral video producer Lisa Nova and a handful of bloggers, Jane talked about why doing an exercise series for people of her generation is important and how exercise has changed since the '80s.

Like thousands of other aerobic-crazed women in the '80s and '90s we used to "drive the big truck" with Jane on her original workout tapes. The actress-turned-political-activist pretty much invented the genre. She pointed out, "I didn't create the workout, but I put it on video and I popularized it and that changed everything. It created a fitness industry... It also opened up a whole new profession or broadened a profession for aerobics teachers and fitness teachers."

Jane recalled that before the '80s fitness craze, women were not really welcome in gyms. She said, "Women were not supposed to have muscles... We weren't supposed to sweat... That's all changed now and if I contributed in some small way to that I feel good about it. Now we just have to broaden the base of people who do it."

She became inspired to do the new series after writing a new book called Prime Time: Creating a Great Third Act

. She described the book saying, "It's about how you go through life and reach the last third of your life with peace and calm and poise and happiness and a sense of well being.

She explained that, "When you get older it is critical that you keep physically active... because all kinds of things can wrong if you don't, including your brain... So it was because of the book that I said, 'Who better to do exercise programs for this demographic?'"

She claimed that most of today's young fitness instructors don't want to do work-outs for older people. "So older people get ignored. So I said, 'Well, I started the video industry, so I might as well do it.'"

She added, "My ultimate goal is to encourage people who are older, and maybe who have never worked out, who don't consider themselves necessarily fit to begin to move, on a regular basis, their whole body."

She explained that the essential difference between exercise now and back when the video industry started is the attention paid to the core. She explained, "Your trunk, your stomach, your back and your hips are all being recruited into action and it's a fantastic workout. "

As far as the difference with the videos now from her original series, she said, "They're slower. They're easier. They work all the body, but they're safe for people over 50 or for people who maybe have never worked out before."

But if you're not quite ready for the slowed down exercise routines yet, have no fear. Jane is also re-launching the original Jane Fonda Workout brand with four emerging female fitness trainers who she calls "internet stars" — Jeanette Jenkins, Karena Dawn, Katrina Hodgson and Tara Stiles. She explained, "They have their own following, but I want to give them a boost... so they're doing DVDs under my workout brand." They will be in stores and online on December 26.

For other fitness stories check out:
A Big Week for The Biggest Loser
Jillian Michaels Transforms America One Family at a Time