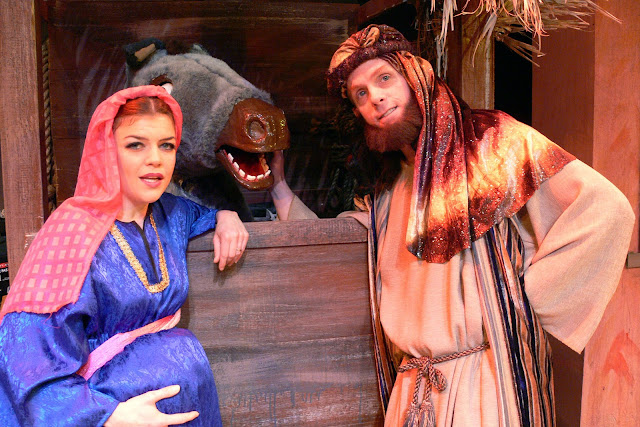 One thing’s for sure, the manger has never rocked as hard as it does during the Falcon Theatre’s holiday production of The First Jo-el. Each year the TroubadoUr Theater Company presents a Christmas show with a pop music twist on the stage in Burbank-adjacent Toluca Lake, California. Past musical extravaganzas have included JACKson FROST, Little Drummer Bowie, Santa Clause is Comin’ to Motown and A Christmas Carol King. You get the joke.

But we’re happy to report that what might just sound like a forced cliché is actually very funny. This season’s production combining the story of the birth of Christ with the tunes of Billy Joel does not disappoint. As they are known to do, the Troubies turned the biblical tale on its ear. Altering the lore of the birth of the baby Jesus to include three wise guys named Gold, Frankenstein and Myr. Not to mention throwing in another unwed pregnant girl, whose family is gunning for her to steal the Messiah-mama spotlight. This is not your father’s nativity scene. 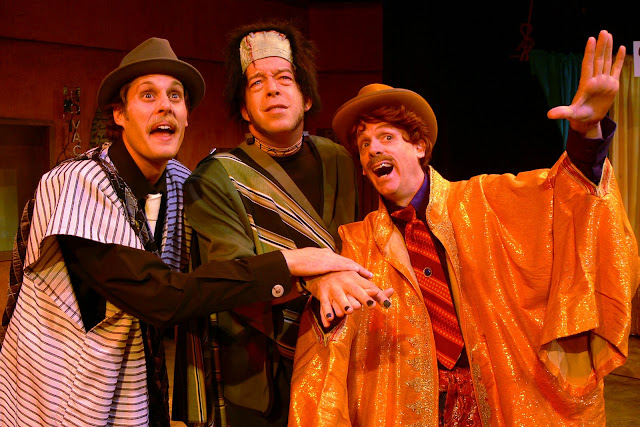 And of course, all the way through they sprinkle multi-decade pop culture nods to the likes of All in the Family, Kid ‘n Play and Miley Cyrus alongside the appearance of a New Testament character or two. Well four literally if you count the baby Jesus doll who makes a last minute showing.

In true Troubie form, actor-director Matt Walker turned on his Nathan Lane meets Hugh Laurie style charm in the parts of Gold and Joseph. Lisa Valenzuela belted out her flawless vocals as Greta. And Katie Nunez and Katherine Malak showed some deft electric-slide moves, baby bumps and all.

But once again it was Beth Kennedy who stole the show as Hoffy and the Winter Warlock she had done in the recent Troubadour production of A Wither’s Tale. And we were thrilled that her lazy sidekick Bobby made a cameo appearance as well. Surely he’s destined to be the Troubie mascot for years to come.

Morgan Rusler made a return to the Falcon stage in the dual roles of King Herod and Frankenstein. While die-hard Mad Men fans would recognize him as Dick Whitman’s “Uncle Mack,” the dramatic actor nailed a surprisingly funny performance.

But the biggest treat of the night was seeing Jack McGee’s turn as the inn owner Nicholas. Who knew that Rescue Me’s hard as nails chief could belt out “She’s Got a Way” well enough to bring a tear to the eye? 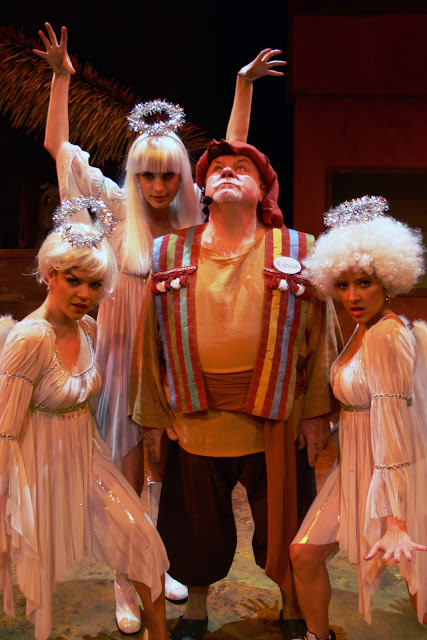 The show runs through January 16. But as befitting a satire about the birth of Christ, the theater is dark December 24 through 26 and again on December 31 and January 1. For ticket info visit the Falcon Theatre website or call 818-955-8101. The Falcon Theatre is located at 4252 Riverside Drive in Burbank, California.

A Young Jeff Bridges Shows His Face in Tron: Legacy

Ben Babylon: A Musical Legacy in the Making