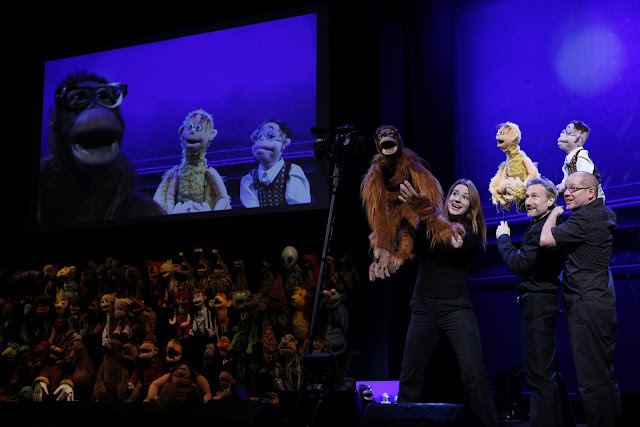 As the official website for Henson Alternative Stuffed and Unstrung points out, “People used to say, ‘Puppets are lame. Improv usually sucks.’” And from that one simple slogan, the team behind the irreverent, live show wants you to know that this is not just another trip to Sesame Street.

In the show six comedians work with 80 Henson puppets, which they want to be clear are not Muppets, in a “100% uncensored show.”

You have two choices of how to watch the action unfold. You can keep your focus on two large TV screens on either side of the stage, which allows you to enjoy the illusion that the puppets are acting of their own free will. Or you can check out the action on the stage, and get a rarely seen view of the puppeteers driving the action. They’re out in full force, not hidden behind some face brick wall or pedestal.

In an interview on the Henson.com Podcast, Brian Henson explained the genesis of the show, “What we set out to do was develop a new comedic voice for puppets. And we started working with Patrick Bristow with comedic improv… improvising with puppets.”

The company’s early improv bits were initially performed for friends and industry insiders. And then they took to the road including gigs at the U.S. Comedy Arts Festival, the Edinburgh Fringe Festival and the Big Laugh Comedy Festival in Sydney, Australia.

Henson continued, “We performed a little bit around the world and it was always very, very popular. So we thought it would be great to do a proper show in New York.” Produced by Westbeth Entertainment and Henson Alternative, Puppet Up! hit the Union Square Theatre in NYC for a couple of months this past spring.

Now Henson Alternative is bringing Stuffed and Unstrung home to Southern California for the holidays. And while it may not be what Muppet purists have come to expect from the franchise, Henson says the show is “going back to the roots of my dad, Jim Henson, where he started doing puppets for adults and then started working down into the family.”

There are only six shows scheduled at the Irvine Barclay Theatre from December 29 through January 2, including two seatings at 7 and 10 p.m. on New Year’s Eve. What better way to ring in ’11? Tickets range from $38 to $55 and are going fast so book now. Buy online or call 949-854-4646 ext. 1. The Irvine Barclay Theatre is located at 4242 Campus Drive in Irvine, California.

If you can’t make it to Irvine, don’t be disappointed. There are lots of great clips up on the Stuffed and Unstrung site.