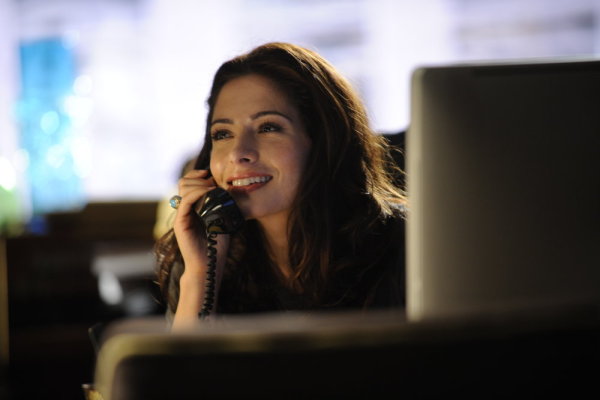 and Virginia Williams (How I Met Your Mother

), premieres tonight at 10 p.m. Sarah plays Kate Reed, an ex-attorney who now does mediation. She works for her father's widow (played by Williams) and has just divorced her husband (played by Trucco). The series' creator Michael Sardo does a nice job mixing comedy and drama within scenes, and has definitely taken the necessary steps to set the show apart from the sea of legal dramas on current television. We spoke with Sardo about the characters, the guest stars, and the pressure of creating a show.

We wondered why viewers would tune into this show with so much similar fare available, and asked Sardo if he has an idea of who will tune in? He replied, "I go from the point of view of let’s create the most interesting, vibrant environment, hopefully one that you’ve never seen before, and see who’s interested in that. Some people want comfort food. They want the same thing delivered the same way every week, and this would be the wrong show for them. We’re trying to tell stories that we haven’t seen before that are very human, that engage us."

He continued, "It’s a matter of how well you draw those characters, how relatable they are, how much we see ourselves in them and how closely you engage with that particular story being told. So I think we’ve told very engaging, relatable stories, and as to who will be interested I’m kind of curious to see myself. I hope lots of people."

The characters in question are Kate, Lauren and Justin. Sardo described the lead saying, "Kate is someone who, no matter how obtuse the conflict that someone may have, in a mediation Kate can find a way to get to the center of it and to get people to see both sides of the problem and to join them in creating an equitable solution. What she struggles with is doing the same thing in her personal life. She’s such a passionate person that her passions overrun her when it comes to the relationships she’s closest to."

Sardo explained that one of these complicated relationships is with her boss, who also happens to be her father's recent widow, Lauren. He revealed, "We worked… very hard to create a character that I don’t believe we’ve seen before. On the surface, if you just looked at her stats, you would think she’s a trophy wife, but she’s not. She had true love with Kate’s father, and she’s a woman who believes in truth and justice as strongly as Kate does, she just approaches it very differently. She believes in the letter of the law and in following that, and that’s where all truth derives from. Kate believes in questioning everything. So they are on opposite ends of the spectrum in terms of how you find truth and justice."

Kate's other complex involvement is with her ex-husband, Justin, an Assistant District Attorney for the city of San Francisco. Sardo noted, he "is equally committed to the law, has a more obvious heart than Lauren in terms of his approach to the law, and a very open heart when it comes to Kate. But he also believes in the system itself, and Kate is always questioning the system… One of the things that blew up her marriage was she kept questioning the law. Ultimately, the only person she could question it with at night was Justin, who took it as a personal indictment, and sometimes it was."

Sardo related that it was a challenge to write for two characters with such a complicated history as opposed to new partners. He remarked, "It was difficult, but it was fun, because so often you see a show you see a will they/won’t they sleep together, and I was just interested in they already have and what’s left when a relationship breaks apart… Kate in general is not about neat, so I was interested in a relationship that wasn’t neat… Theirs is a complicated relationship, and it doesn’t work on some levels but on some very primal levels it works perfectly, and they struggle with that."

Kate's other relationship is with her father, who recently passed away. In the pilot, we see her call his cell phone to hear his voice on the message. Sardo commented, "It comes out of that general theme of in my own experience [that] life is not neat. Sometimes when someone you care about passes away the hard part is actually after the funeral. You’re in handle mode then, and everyone is around you, but it’s a week a later… It doesn’t just end right there, and so it seemed to me that that moment where she just keeps wanting to reach out to her dad, and no one thought to shut off his phone service. Who thinks of that in the wake of a funeral? It just seemed like the best expression of how human and fragile and sloppy our lives are, especially in moments of grief."

In addition to the three main characters, Fairly Legal features some well-known guest stars. Sardo divulged, "Gerald McRaney, plays a judge on the show, he was in the pilot… we’ve had [him] back several times… just such a fine actor and a joy to have… Richard Dean Anderson comes on a little later in the run as a very interesting person in Kate’s life playing a character that you haven’t seen him play before. We have Ken Howard in the pilot, who just gives this very powerful, wonderful performance. Paul Schultz from Nurse Jackie who plays Eddie the pharmacist is in an episode that gives just a heart wrenching performance."

Sardo expanded on Anderson's involvement, explaining that his character becomes important to Kate because he gets her to realize that she didn’t know her father as well as she thought she did. He continued, "We’ve had a lot of fun with Richard. He brings so much to the screen in so little time. It’s what we were looking for with him is that there aren’t a lot of people who you can say come in and we want you to do a scene, and we want that scene to resonate over the course of a couple of episodes and have it be memorable, and Richard’s that. There’s a reason he’s been on television for decades. He has that gravitas that can carry over. So I don’t mean to be coy about what we’re doing with him, but it’s kind of complicated and it will develop over the course of more than one season his relationship with her."

So does Sardo have a sense of how the show will do within the USA lineup? He responded, "I think it will perform very well. I think that we have the right time spot. We’re very fortunate to have Royal Pains as our lead in. They have a fairly sophisticated audience, and a big audience, and we’ll get a good sample. I’ve been doing this long enough that I’ve seen shows that I’ve been mystified are a hit and I’ve seen shows that miss that I’m mystified by, and so I know USA is taking great care in terms of when to release us and rolling us out at the proper time after the proper lead in. So everything has been perfectly positioned for us to succeed. It’s going to be up to the audience. It’s their turn to vote, so I’m curious to see what they say. I think we’ll do well, but let’s have this conversation again in a month."

Sardo did comment that he does not feel any extra burden with Fairly Legal being a midseason show. He pointed out, "The pressure for me is all during the season while we’re shooting them. Now it’s this other thing that exists. The network will have their own expectations for the show, their own metric on which they measure it against, and I actually don’t know what those are in terms of what makes them happy. My job is to make the best show that I can and the most interesting show, and if I think too much about those other things."

He also revealed that he is looking forward to the premiere. Sardo admitted, "When you drive down Sunset Boulevard and see giant posters for your show, it’s pretty exciting. Getting pictures from friends in New York of, 'Here’s the poster on the subway,' and having these kind of dialogues, talking to you people about what the show is. I was talking to someone who has a law blog yesterday, and he said, 'What do you hope that people will get out of the show?' I said, 'I think they’ll have a great time. I think they’ll be moved. I think they’ll laugh.' And I think they’ll also see that in our extremely off the charts litigious society that there are other ways to go about solving your problems."

He concluded, "Without being too high and mighty about it, I do think that there are some good lessons in there for us. I’m excited that those ideas, and some things I feel really strongly about, are going to get up there in the ether and get to be seen and discussed by people. It’s very exciting."

For other related stories check out:
USA Takes a Stand Against Discrimination
Tim DeKay and Matt Bomer Talk about White Collar