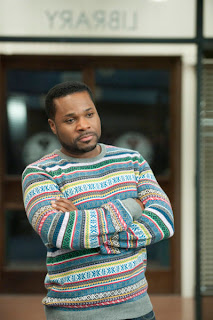 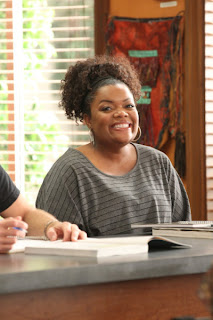 Community is back tonight with a set of brand new episodes and a very special guest star. Best known as Theo from The Cosby Show, Malcolm-Jamal Warner joins the cast to play Andre, Shirley’s not-so-nice ex-husband. We spoke with Yvette Nicole Brown, who plays the oh-so-sweet single mom in Greendale Community College’s study group, and the Cosby star in a recent conference call interview.

Yvette explained what makes working on Community unique from other shows, “We’re always amazed that we are not just on a sitcom. We’ve been on a film noir set. We’ve been on a cartoon set… This show has morphed into so many different things, and you get to be a thousand different characters even though you’re playing the same one. So that’s been a great gift.”

She quoted her guest star, who she felt summed it up perfectly, “Malcolm actually said something interesting yesterday about the show. He said… ‘It straddles the line between brilliant and absurd.’ So at some moments it’s totally like a lucid straightforward comedy and then other moments it’s like Bizarro Land. But it works in its craziness. And I think that’s what is great as an actor to play.”

Malcolm talked about entering this Bizarro Land, which happens to air at 8 p.m. EST on NBC — his Cosby Show timeslot. “I guess you look at… the progression of time, from 20 something years ago to now… Personally it’s great to have a career that stands long enough to be able to, 25 years later, come back to a show in the same great timeslot. But to add to that I’m glad I’m coming back to a very funny show.”

He addressed how TV has changed since the Cosby days, “It’s apples and oranges really because it’s a completely different format… The half-hours that I’ve been doing have been traditional, four camera, in front of a live audience situation comedy format. So they’re very different. And, again, I think it speaks to the progression of time and… a continual evolving of the sitcoms out there.”

And off-camera Malcolm clearly enjoys the evolution. He admitted that he’s been a long-standing Community devotee. This fandom made fitting in a bit easier according to Warner, who remarked, “I think it helped to have watched the show and know who the characters are. But what was really great was to walk in and just see how great a rapport everyone had with each other.”

Yvette divulged that that the chemistry among the cast members is genuine. “I think it sounds corny and I think everybody says this, but we really do like each other as people. And I think when you like each other you tend to have fun with each other no matter what you’re doing even if it’s 16 hours around a table, in a room.”

That off-screen closeness, she revealed, often makes it onto the small screen. “A lot of the stuff that you see on air, a lot of it is a byproduct of the fun that we’re having. And we always laugh because a lot of the little jokes that make it on the show… comes from ten hours around the table trying to make each other laugh. So once you say the line 50,000 times, [you think], ‘Now this one’s for Danny’… Because I know if I do this one and Danny cracks up then the world will be happy because… if he finds it funny the world will find it funny… I think our silliness translates and that’s what the audience sees hopefully.”

Some lucky fans have been able to see this chemistry at play in person. Some Community cast members have participated in live performances together. Yvette acknowledged that these comedy events have been a real insight into the players on the series, “If anyone’s seen us taking the show on the road… wherever we all go as a group, you’re watching the show live. We’re all pretty much our characters… I can’t even pretend anymore that I’m not almost exactly like Shirley… It’s a heightened version of us but we’re all pretty much the same character. So what you see is what you get on screen and off.”

We asked Yvette how she created the super-sweet, soft-spoken Shirley. She explained, “I love her dual nature… because she’s so presentational in nature and she always wants to put out such a pretty picture with her clothing and her hair and everything is always just so. My thought was that this type of women would talk like this and, ‘Oh my goodness, what do you think?’”

And Yvetted concluded, that the more genuine Shirley might become a bigger presence on the show. “I’ve talked to the writers about it and we toyed with the idea of at some point having me speak in my own voice maybe when Shirley’s in a place where she feels completely safe because I don’t know that she completely trusts the study group just yet to show who she really is.”

Will her ex-husband bring that persona out? Yvette added, “It’ll be great for me if it comes through an interaction with Andre. It will be great if Andre called her on it or something.”

An Interview with Jim Rash from “Community”