Jim Carrey on Tonight's Inside the Actors Studio 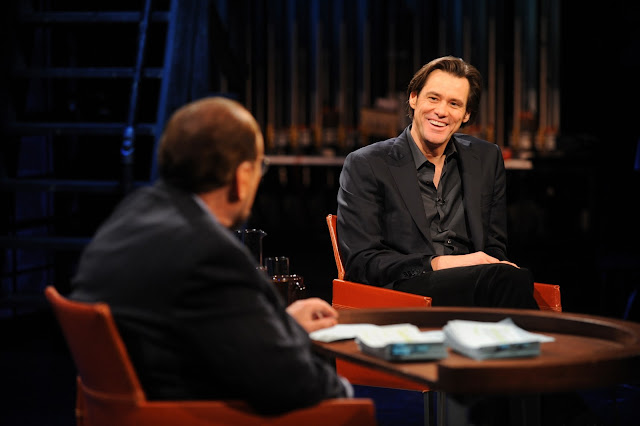 Apparently James Lipton has been trying to get Jim Carrey on Inside the Actors Studio since the show premiered 17 years ago. If you watch the interview tonight we're guessing you'll find out what took Jim so long to say, "Yes."

In the meantime, we do know a few things he will talk about including what Dustin Hoffman had to say about Dumb and Dumber

, working with Ewan McGregor on his new movie I Love You, Phillip Morris and what happened to that infamous $10 million check he wrote himself when he was just starting out.

If you want to see for yourself tune in to Bravo tonight at 8 p.m. If you can't wait another second read on for a few snippets of the interview.

When James Lipton asked about Dumb and Dumber and acting with co-star Jeff Daniels, Carrey recalled a phone call he got from Dustin Hoffman, who said, "It was one of the realest relationships, friend relationships, he had ever seen in a movie."

Carrey also recounted the research he did with Ewan McGregor for I Love You, Phillip Morris. The pair went to some gay bars in Miami in preparation for playing lovers in the film. Jim said that Ewan, always the method actor, wanted to get his ear pierced for the role, but came back with an earring on the wrong side.

And most people who know Jim Carrey are aware that as a struggling young actor he wrote himself a check for $10 million and pre-dated it five years in advance. What many don't know is that after becoming famous, he tucked the uncashed check in his dad's suit pocket as he lay in his casket. Carrey said, "He saw The Mask

To see the full Jim Carrey interview tune into Inside the Actors Studio tonight at 8 p.m. EST/7 p.m. Central on Bravo.


For other Jim Carrey stories check out:
The "Saturday Night Live" Presidents Return
Our Favorite Bloodsuckers