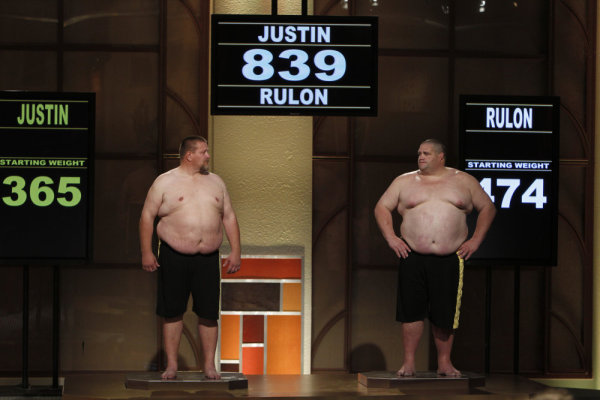 Last week season 11 of The Biggest Loser premiered with a contestant who was familiar to many sports fans. Rulon Gardner won Olympic Gold at the 2000 Sydney Games. He beat out three-time champion Alexander Karelin in Greco-wrestling in an underdog-takes-all kind of story. He won another medal, this time the bronze, at the 2004 Olympics in Athens. But after that the 264-pound wrestler began his battle with the bulge and his addiction to food. He tipped The Biggest Loser scales at 474 lbs. when he weighed it on day one at the ranch.

Some people think he has an advantage being a world-class athlete. Most feel he's the odds on favorite for a win, which of course puts a on his back. But Rulon admitted in a recent conference call interview that in some ways losing weight on The Biggest Loser is tougher than his Olympic training.

Tune in to The Biggest Loser on Tuesday nights at 8 p.m. EST/7 p.m. Central on NBC to follow Rulon's journey. And read on to see how he compares his time at the ranch to his days as an elite Olympic athlete.

Q: On the first week’s show you said that being on The Biggest Loser was tougher than your Olympic training. Did you mean that the workouts were harder or did you mean it was tougher because of the 200 extra pounds that you carry?

RULON: It was ultimately the 200 pounds I had to carry during the workouts. That first workout we had was so physical and so exhausting. And it was so brutal because, I was trying to make my body run and sprint and move like I used to when I was 280 or 260 pounds. And it didn’t move the same way. It was like moving a bowling ball body when it used to be able to run with a stick. And for me it was tough. And ultimately, our trainers, they pushed us. We trained three workouts a day that were mandatory and then one that really wasn’t mandatory, but ultimately it was because they wanted to make sure that we met every goal that we set for ourselves. So it was absolutely difficult for me.

And I don’t want to disrespect any of the training, but wrestling you’re so specific and you’re so good. You’re such a fine-tuned athlete that you’ve been doing it every day. And getting on the show I had been sedentary for six years. And I was thrust into workouts that were very were moderate to high intensity for a person who had been in shape for years.

There’s no disrespect, it’s just it’s hard. It’s hard to physically move and to get around when you’re so overweight. And you have the competition weight. And I was still huge then. I was 286 and 265 pounds at the two Olympics. And I was a big guy then. And then you throw another 200 pounds on it. And my structure, I’m only 6’1”. And there’s so much girth moving 474 pounds. I had a lot of muscle on me, but ultimately that muscle gets fatigued and can get injured because the human body is not meant to function at that weight.

Q: So the comparison has to do with you rather than the training?

RULON: Yes, well yes… But ultimately they were wanting us to sprint, to lift, to jump, to run, to roll. They want to do so many functions that I physically wasn’t capable of really doing at that point. If somebody had asked me to do a cartwheel I’d probably said, "You’re crazy." I can function at walking and slowly running, but anything beyond that, my body is not used to putting stress of 470 pounds on one joint. And the things we did in that first workout, that was exactly the stuff we were required to do. And the first workout I’m out there doing sprints against the other teammates. And the first thing I do is I pull my quad. And it was because my leg is probably 100 plus pounds itself. And I’m expecting it to move like it was when I was 200 pounds lighter. And my leg said, "Sorry, you just hurt me." And day one I had an injury. And it was like, "Rulon, you have to remember you’ve gained the weight." And it not only became a physical battle, it became a mental battle too.

And for us as all the team members, it was so much about knowing exactly where your position is and knowing exactly where you have to control your energy expended. And then ultimately is the medical staff, there was injuries that came about. And the medical staff, it was a challenge to know how hard to push without making the trainers upset because they expect you to be on the field. And it’s point blank, "I can’t move. I can’t do this." And the trainers first were pretty resistant to the idea of a person not doing the workout because maybe we’re just big, fat and lazy.

Or is it a matter of "You know what, I physically have a problem?" And I think there was a meeting of the minds the first week, first two weeks of training because it was so physical and it was so hard. But then also there was limitations our body had. So it was tough I think for us as contestants to push through the pain of knowing that that pain could become a serious injury and then also have the trainers say, "Okay what? We’ll find something alternative for you to do. But you’re still going to do something," because we were all expected to be there and to be 100% in the game and pushing ourselves to get to those fitness goals. And our trainers weren’t going to let us sit back and pull back. Every one of us had the responsibility. And as you watch the show you’ll be able to see, "Holy cow, they went at it," because there was an injury. But some of the injuries, you can pretty well tell which ones, are truly injuries and which ones are fakes. And it’s all about communication. And the staff, the medical staff that we work with is great. And they’re not going to give you just the medical remedy for everything. They’re going to say, "Hey, this is your physical problem. Let’s find an alternative for you to do." So he contrast [with the Olympics] is… the trainers ultimately tell us athletes and us contestants what to do. And it’s about listening to them and listen for their expertise. And then ultimately the trainers want us to push ourselves to reach those absolute physical goals.