Ricky Geravis Back for Round 2 Hosting the Golden Globes 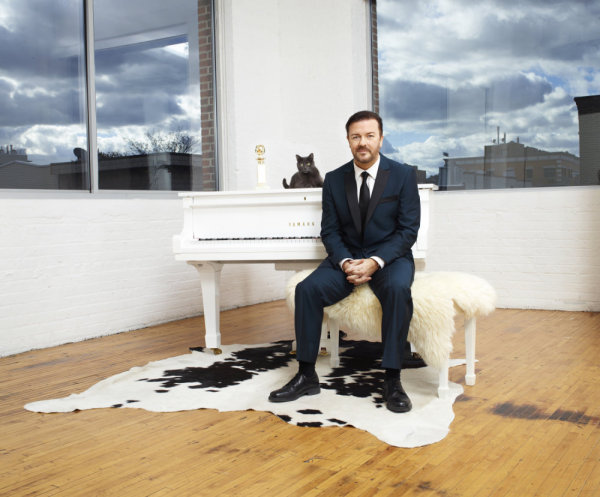 This Sunday night Ricky Gervais returns to host the Golden Globes for a second time. We enjoyed Ricky's performance last year and look forward to his sharp wit and off kilter sense of humor to spice up the awards again this weekend. Of course not everyone was pleased with Gervais' pokes at the celebrities and still others didn’t think he took his humor far enough. So the star of The Office and Extras

is left walking a fine line between offensive and safe. In a recent conference call interview, Gervais talked about his 2010 performance, what he learned from it and being a comedian with a conscience.

Q: How did you feel that things went last year hosting the Golden Globes and were there things you learned that you’ll apply this year?

Q: How surprised were you and how quickly afterwards did they invite you back?

RICKY: Well the strange thing was they said during the show, “Great. We’d love you to do it again.” And I went, “Well let’s see. It’s not over yet.” And so yes, they invited me back on the way they thought it went and my performance, which is nice and very flattering and the way it should be. But then I saw I think the ratings went up about 18% or something so I thought it was on the cards. I wasn’t going to do it again, but then I thought, “Oh no, I could improve.” That’s what I really thought.

Q: A lot of the viewers didn’t get the reference during your last hosting gig to Extras when you made the comment to Kate Winslet about the Holocaust. Are you going to have more stuff like that coming up this time?

RICKY: Do you mean references that no one understands? I’ve got loads of those.

Q: Yes, that will insult a bunch of people.

RICKY: The last thing I want to do is genuinely offend anyone. I couldn’t live with myself. So I want the victims of the joke to like it as well… That was an episode of Extras where Kate Winslet played a twisted version of herself, of course, and she was only doing a Holocaust movie to win an Oscar. And it came true... I honestly couldn’t believe my luck when that happened. A funny thing happened actually at the Globes before that and Tom Hanks was telling me that he was on his way to work and he was listening to the radio and he must’ve just tuned in and they were playing a clip from the Extras that Kate Winslet was in. And she was saying, “Yes. I mean, do we need another Holocaust movie?” And he thought it was an interview. He didn’t realize. He hadn’t seen the show. So he thought Kate Winslet was on the radio saying she’d only done a Holocaust film to win an Oscar. And he went around telling everyone, “What is she thinking?" And then his producer said, “Tom, that must’ve been a clip from the show.” And then he went, “All right. Okay.” And he’d spent the whole day going around telling people that Kate Winslet had lost her mind.

Q: When you’re preparing for the Globes how much are you going to be specifically writing and how much air do you leave in to comment on things that come up during the show or to riff on people in the audience?

RICKY: Well actually… the last one I wrote it by myself. I got the list of people that were present and I did them all in an hour. My favorite things I said were probably the introduction or the bespoke one-liners about the people there — the Mel Gibson gag, the Paul McCartney gag, the Colin Farrell gag, the Jennifer Aniston gag. So if I can get more of that type of thing that’s cheeky and a little bit naughty and risqué but again not nasty, then I’ll be happy. But I think I can take it a bit further. I think people know where I’m coming from now. I’ve done enough of these award things like the Emmys and the Globes where they know what I’m doing and hopefully I won’t blow that either way by saying something that’s so horrendous I’ll never work again. And even worse, doing something that’s so anodyne I’ll never work again.

You have these dark thoughts and you go, “Well why did that come into my brain?” But… there is a constant fight in my head with what will go down well and what won’t… It comes from a good or a bad place and if people know where you’re coming from and what the target really is, you can get away with murder, queue O.J. Simpson joke.

But I don’t use it as a platform to get political or get my own back on the world. I’m hosting a party. It’s a televised industry party. So you’ve got to keep it light. But as I say that’s not to say you can go out there and just do awfully flat, broad, anodyne, homogenized, reworked material. I think you can be original and push the boundaries a little bit and still come in line with taste and decency. That’s my plan.

But you can’t win because everyone has got their own little cause. Everyone has got what they find offensive. In my stand-up specials you get letters saying, “I love the show although I was a little bit disappointed with the reference to the Holocaust."

And I want to go, “But you like the jokes about children with cancer. You liked the jokes about AIDS, African famine, disability. So you knew I was joking then but when it comes onto your thing because it’s so personal, you can’t treat it with the same distance, the same level of irony. You can’t realize that that’s also satirical.”

But you can’t win. So in your heart of hearts you’ve got to know you meant it in good faith and you have to be able to justify it. I have a simple rule. If I can’t justify why a joke’s okay, I don’t do it. I’m not one of these comedians that go, "Comedy is your conscience taking a day off."

My conscience never takes a day off. I can justify everything I do and I can stand up and I could argue the point on a right-to-reply show. I could actually say why this joke was okay to do. And I’ll never lose that because I don’t want to go home and go, “Oh, I shouldn’t have said that. That’s really awful. Why would I say that?” So, you know, everything’s considered.

For other related stories check out:
Jersey Shore and The Office T-Shirt Giveaway
Angela Kinsey & Ellie Kemp on "The Office" Halloween Episode