Tiffany and Debbie Gibson — Giving the People What they Want 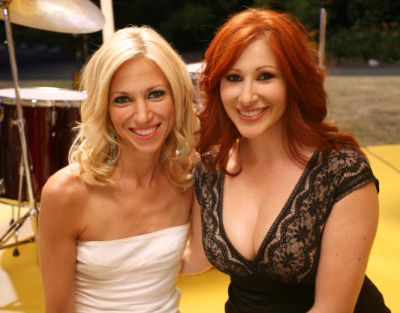 Back in the '80s teen pop stars Deborah Gibson and Tiffany were made out to be the biggest of rivals, mainly because they were the same age and they both sang. They were kind of the big hair-era Christina and Britney. But in a recent conference call interview we found out that the pair didn’t know each other that well back in the day. So their current collaboration on Syfy's Mega Python vs. Gatoroid was a chance for the two women to finally become friends after all these years. We spoke with them about the supposed rivalry, doing future projects together and their inspirations.

Tiffany discussed how it feels to be reconnected with Deborah after all these years. She remarked, "I think it’s something that our fans have waited for a long time. The funny thing to me is, who would've thought that pythons and gators would unite us." She continued, "It was awesome for me to be able to get to know Debbie more, because we've really never had a chance to sit and talk. So I think that that was one of the perks of being able to work with each other on this movie."

Deborah reinforced that sentiment saying, "I definitely developed a lot of admiration for Tiffany and her abilities and her work ethic and besides the fact that we just had a crazy good fun. We've been put in the same sentence forever and ever and we're well aware that there are definite pop-culture fans out there that have wanted us to collaborate on something for a long time. And we’re just happy to give them what they want. We’re giving the people what they want."

The actresses described one scene in the made-for-TV movie that finds them in the middle of an all out food fight complete with whip cream and pies. Deborah claimed, "It'll be more therapeutic for people to watch who have fantasized about that happening. I know that this is not what you want to hear, but I really never did have the desire to slap Tiffany in the face."

Tiffany added, "We've been together for a long time. Now it's coming full circle that we actually are developing a friendship."

Fans are hopeful that this collaboration will continue and they will do more projects together — maybe something of the musical variety. Deborah told us that they recently did a show at the Canal Room in New York and that if the right opportunity presents itself they would consider a tour. She admitted, "I'm somebody who takes one step at a time and I never say never. If something comes up and it interests she and I, I'm sure we would both entertain it. I think if it deterred us each from our individual musical goals and it wasn't right then we wouldn't. I'm certainly open to entertaining anything."

Tiffany interjected, "If it's for the right reason and it shines a bright light on it, it would be a great thing… Going back to the fans, I think that they deserve it and they would appreciate it, but it can't take away from what we’re doing currently now. It has to be something that embraces that as well."

The pair went on to joke about appearing on Broadway together since Gibson is very familiar with the arena. She confessed, "I'm waiting for the phone to ring for them to call us to do Velma and Roxy together in Chicago. I'm just saying."

Gibson named some of her stage inspirations, "I think I’ll do theater my whole life. Women like Patty LuPone and Betty Buckley, they’re as much heroes to me as Elton John and Billy Joel." She also discussed some pop icons, "Everybody in my genre wants to work with Dr. Luke. Personally… I think he's probably the craftiest pop writer of our time… I got to work with the late great Eartha Kitt in the tour of the musical Cinderella. She was an idol of mine. She was kicking her leg over her head still at 76 years old. People that go through all these phases in their careers and come out on top and remain youthful into their later years… those examples I always use and [those are] the people that I admire."

Tiffany jumped in to reveal she was sadden by the news of the death of her heroes, "Tina Marie was somebody that I really always was inspired by and cried so much when she passed away just recently. And I just kept thinking I never even got a chance to meet her. So, for me that was a lesson that sometimes you can't make these things happen but definitely, always maybe try to pursue them a little harder. If just standing in the room when Tina Marie was singing some of her shows — I went to many of her concerts — and just having that energy in the room I would always go home and up my game, and be inspired even more to work harder at my career to be a better songwriter and as a vocalist to just kind of live outside the box a little bit."

For related stories check out:
An Interview with the Cast and Crew of Being Human
Colin Morgan and Bradley James Return to Camelot