The Most Dramatic Chris Harrison Interview… EVER 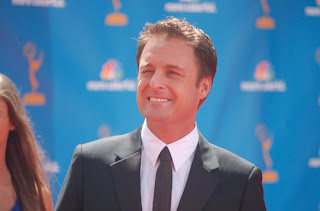 Perhaps nobody knows the inner workings of The Bachelor

better than Chris Harrison. Sure the producers know the nuts and bolts of how to put the show together, but it is the affable host who crouches beside the lovelorn in the trenches, rooting for them to find love. In a recent conference call interview, we spoke with Chris about Bachelorette emotions, over the top dates and the modern day soap opera.

Harrison related that it’s the purity of the concept that allows the show to consistently deliver high drama. He acknowledged, “You have to give that credit to Mike Fleiss, the creator of the show and Martin Hilton, the executive producer now for creating what they’ve created. And that is, [that] this obviously is this environment and its format that works. Every year, season in and season out, it just works. And I think the fact that it's not a game show. There is nothing at the end of this. There's no catch to our show… You have this guy or this girl choosing somebody else and if it works, great, if it doesn't, so be it. That's it. And when you break it down our show is just about that. It's just about a relationship. And so I think the atmosphere they’ve created and the fact that there is no catch [at] the end, it's just about them trying to live their life is very interesting and compelling.”


Of course beyond the simplicity of the concept is a highly designed spider-web of meltdown inducing dates in the sexiest of environments. Harrison justified the production team’s choices of exotic locals and over-the-top dates, saying, “Take Ali for example. Will she and Roberto ever go to Reykjavik, Istanbul and Bora Bora? Probably not. But if we showed them going to the Pizza Hut and then going to the movies as a date, it's not really good TV. So the bottom line is we're delivering a television show and entertainment.”

That’s why he believes that The Bachelor has managed to redefine a dying-genre. He remarked, “I think our show is, as much about finding love, is also escapism. It has become the modern day soap opera. And it… might be the demise of the modern day of soap operas, because people watch our show for that escapism.”

And still, there’s an, albeit manipulated reality on The Bachelor that viewers can’t find on General Hospital

. Harrison said that fans “also know it's real,” so when the season ends, devotees can stay connected to the stars. “Ali and Roberto live on. Trista and Ryan and their family live on long after our show is over. And so, it really is this ultimate soap opera. And so, it's interesting to see if that has really had an effect on why soap operas are declining on the networks these days.”

What fades is the unreality of the high-cost dream dates that the Bachelor and his harem go on each week. Harrison laughed, “I think and Brad apologized to all the [ladies]. He's like, ‘What? I'm not going to pick you up in the driveway in a helicopter ever. Know that. Know we're not going to go rappelling down the side of a building probably ever again.' But let's take this for what it is. And let's enjoy going to Anguilla and going to South Africa and once in a lifetime opportunities.’”

Once Brad has made his final choice, he hopefully will also leave behind the Bachelor concepts of group dates and two-on-ones. But for now, they create the drama in his TV show courtships. Harrison divulged what goes into making a decision about who goes on which dates each week. “A lot of factors go into it. What's happened prior in the season, who's gotten dates, who hasn't, who's kind of gone on what type of dates, whether it's one-on-one, group dates. And so producers will definitely have a large say.”

That doesn’t mean the Bachelor doesn’t get to weigh in on the choice. Harrison continued, “Our producers will sit with Brad and say, ‘OK this week’ – without telling him about the dates because sometimes we want him surprised as to where he's going. But we will say, ‘OK, who do you really want to spend time with? And who have you felt like has been slighted? Who do you feel like you need to…?’”

Brad may be focusing his thoughts on the girl at hand, but the production crew always has their eye on the big picture. Harrison commented, “As producers, you want that date to be compelling. And it's really important that as a viewer, you feel like either girl has a real opportunity of going home. Because… say, Emily, who he has a great connection with, or even a Chantal, who he has a great connection with, if she's on the two-on-one date, right away you're going to be like, ‘Well, he likes her like she's probably not going to go home this week,’ and so it just makes it too obvious. So, it really has to be a nice mix of girls and an interesting dynamic on that date where you really think there's a possibility either girl could go at any moment or both, which has happened in the past.”

One factor that’s a given on every episode of The Bachelor is tears. When asked if he was ever surprised by how emotional the Bachelorettes get so quickly in the season, Harrison told us, “Yes, absolutely. And I've gotten over it, obviously, because I've been doing this for going on ten years. But… there's different type of emotions. The first night when you see a girl crying, I think it's more of, ‘I really wanted to be here longer.’ Obviously they're not in love with Brad. When they're crying that first night, I think it's the competitive nature of people not wanting to lose and not wanting to be kicked off that first night and wanting to be a part of this experience. And I also think, it also sometimes digs up emotions of, ‘I've been unlucky in love and now I'm not even getting the chance to find it here.’ And so, that first night is different kinds of emotions that you guys will see.”

But he understands why viewers are shocked by these first night breakdowns. He admitted, “I know that people are like, ‘How could you be in love only four hours into it?’ Well, they're not in love but it does bring up real emotion.”

He couldn’t deny that emotions change as the season unfolds, as is the case with this week’s episode. “Four or five weeks into it, what you're going to see Monday night, is some real emotion on the girl that gets sent home. And that is real emotion for Brad. They are actually forming a relationship at this point.”

Our money’s on Ashley H., the emotionally unstable dentist going home tonight when The Bachelor airs at 8 p.m. EST/7 p.m. Central on ABC.

The Creators of Episodes Talk About Matt LeBlanc and More