Frank Nicotero is 'The Yahoo! Guy' from 'PiNT' 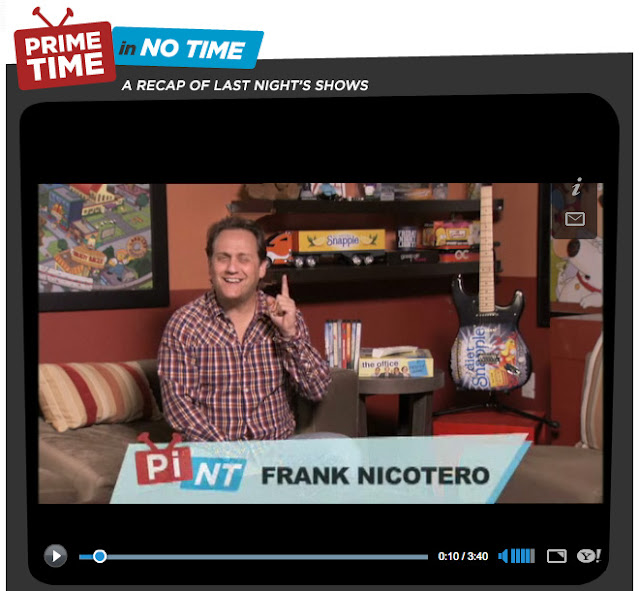 Frank Nicotero, more commonly known as "the Yahoo! guy," is the host of the site's daily Internet show Primetime in No Time or PiNT for short. Any day now, the series will reach a big web milestone — half a billion streams, making it the most popular daily show on the Internet.

To celebrate Yahoo! is bringing in three guest co-hosts to work with Frank — Soleil Moon Frye, Michelle Phan and DeStorm Power, who all have pretty strong web followings of their own. And Yahoo! is holding a contest for fans giving one lucky winner a trip to LA to see their favorite co-host tape an episode of PiNT. Check out Yahoo!'s Facebook page for details.

It seems like Frank deserves a little break. In a recent exclusive phone interview he told us that in the last three years, he has taped 744 episodes of the web series... and counting. And while he's looking forward to working with the three upcoming guests, he also has a few dream co-hosts in mind. "Anyone from Modern Family

He continued, "Anybody who's a regular on those shows that we cover. American Idol, if Ryan Seacrest ever came in, because I always give him a hard time when he makes mistakes and I tease him a lot so that would be pretty incredible."

When the series first started Frank watched all the TV shows himself and penned every script. Eventually they hired writers to lighten his load. He explained that now he typically covers the lead story, the big show of the night like American Idol or Dancing with the Stars, while the staff covers the B and C stories.

But with the glut of programming on TV these days, "PiNT" tends to stick with the obvious big shows. Frank revealed, "The live stuff is always best for us. Award shows are always huge for us. Because who has three, three and half hours, when you have kids and you're working and you've got to get up early, who has three hours to watch the entire Grammy show, but we're going to boil it down in about two minutes for you. The big shows. The live shows. 'American Idol's' obviously. Dancing with the Stars, The Bachelor. The reality stuff where the shocking moments happen are huge for us.

The PiNT host did confess that it's sometimes difficult to choose what shows to pay attention to, "I've flipped through all the cupcake shows and cake shows but there's just so much out there now it's incredible. We try to do our best job in three or four minutes a day, but I still get emails from people saying, 'You didn't cover Chuck' or 'There was such a great moment last night on How I Met Your Mother but we can't cover them all. We try."

And aside from PiNT Frank pops up other places. Fans of One Tree Hill

might recognize him from a few recent guest appearances. He explained, "Two of my friends are actually producers on the show... and they wrote me into a script... so they sent me the script and the description of the character was 'annoying Internet guy.' I said, "If you guys wrote this with me in mind why couldn't you just use my name?' And they were like, 'We just wanted annoying Internet guy.' So I've been on two or three episodes of that. So it's always kind of cool."

Given how much television Nicotero watches, we had to find out what his favorite shows are. As far as scripted series, he replied, "As a comic the sitcoms are still my favorites. I think Family Guy

is still awesome and The Simpsons

I've been a fan for 20 years. Modern Family I think is fantastic and I think 30 Rock

But he also acknowledged, "But I get into American Idol like everyone. Dancing with the Stars is never a show I watched on my own until I got this job. But I get sucked into the story line and enjoy watching the performances and find myself critiquing dance now which I never thought would happen. But there's a million dance shows on TV. So I've become a connoisseur of all reality TV as well."

He also confessed to having a few TV guilty pleasure, "My wife watches the Real Housewives shows and I fought those but The Real Housewives of Beverly Hills I watched almost every episode with her. And I don't know that you can get more guiltier than The Jersey Shore

. I said I wasn't going to watch and then they just kept getting worse and worse and sucking me in. So, I'd say The Jersey Shore."

He also had a lot to say about Intervention

, asking, "Does that qualify as a guilty pleasure? I'm amazed every week that these people don't realize they're on Intervention. I'm like, 'You people do drugs 24/7 and the only thing on TV late at night is Intervention. How are you not stumbling across that on TV to know that that's probably the fake documentary they are calling you about?"

And in talking to Frank, we may have found our newest guilty pleasure. Frank's latest direct to video movie The Gingerdead Man 2: The Passion of the Crunch. Sounds like a must-see to the Passionistas. Checking Netflix now.

For other related stories check out:
Stiller & Meara on Pop Culture (VIDEO)
Tom Hanks is a Lot of Animals