The Community Cast Doesn’t Always Get the Jokes 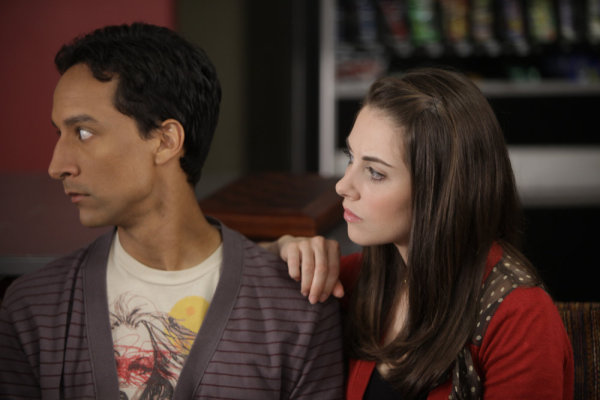 In two seasons Community has built a loyal following of pop culture aficionados who play along each week trying to decipher to references and meta-humor buried in every episode. Oftentimes the iconic imagery is pulled from movies and TV shows made before some of the stars of the show were even born. In a recent conference call interview actors Danny Pudi (who plays Abed) and Alison Brie (who plays Annie) discussed being too young to get some of the jokes, who gets the most laughs on set and how the series has evolved.

Alison recalled an episode they shot this week that she and Danny did not understand the reference. But they turned to cast mate Gillian Jacobs (Britta) who got the joke and explained it. Alison noted, "There’s always someone who’s going to know. And then there’s this little thing called Google. So I think we have some help all around." Then she confessed, "I don’t think any of us every look to Dan and ask. We don’t want him to know that we don’t know."

Danny commented, "The good thing is that we have such a great collective ensemble. Someone’s always around who probably has an idea of what’s going on. So it’s just a matter of turning your head enough times and eventually someone will tell you what you’re talking about."

The members of ensemble also keep each other laughing. Alison and Danny agreed that Ken Jeong (Senor Chang) would take up the most space on a blooper reel if one were made. Danny divulged, "He makes himself laugh more… Consistently he'll be doing something… where he all of a sudden be snapping and he'll just keep making himself laugh. And then he'll have to yell really inappropriate things at himself."

Alison interjected that Donald Glover (Troy) also gets his share of laughs from on set antics, but Danny observed, "I think it's all around the table. Everyone has definitely a good amount that's going to be pretty hard to shuffle through for the DVD."

Part of this humor stems from the fact that over the course of two seasons the cast of Community has become more and more comfortable with each other, much like students would by the sophomore year of college. Danny pointed out, "This is the second year that these characters all know each other. We came in to Greendale not knowing each other at all and so it was only natural that the more you discover about each other’s characters and how you bounce off each other the more you learn about their back stories, where they come from, their lives, the more complicated everything becomes…"

He continued, "Because of that… there's a lot more at stake in terms of our comedy… which I think is really great, too… The show has done a great job of being consistent with keeping the characters rotating. So I feel like you really know where each character’s coming from at this point, which I think makes a lot of the jokes pop more and you also really know how every character’s going to react to a situation at this point."

Alison added, "It's natural for any show to grow… A pilot is just a jumping off point. It's just the thing that you're trying to sell so that people want to watch and are interested in these characters or this story. Dan Harmon really utilized it in that way as a jumping off point. And at that point you get a cast of people. You're hoping they are all going to gel well together. It's such an interesting process just putting together a pilot that's so bizarre."

She expanded, "I think that so quickly we all clicked and gelled as a cast. And then Dan Harmon started to realize that we were also willing to do anything that he would put before us and that the show and the group as it grew stronger was capable of doing anything. So a lot of this stuff is just Dan Harmon and our writers and our producers really just continuing to take great risks and push us and pull us in these different directions."

Some of those twists and turns have included the recent lesbian episode where Annie and Brita almost kissed. Alison revealed, "It was such a funny thing because it wasn’t in the script. We improved it when we were doing it. And then Joe Russo, one of our producers, was there. And he’s like, 'Ah, that’s so great. I’ll just yell kiss her and then you guys do that.' And everyone behind the monitor was like, 'Yes.' It was clearly a bunch of dudes.

Danny stated, "It was crazy that we were all so competitive about that. It was crazy to see that actually end up in an episode, too, because we were so excited about it."

Alison professed, "I couldn’t believe they kept it in, to be honest. But I have to say we really didn’t get that close to kissing. I think we actually got closer to kissing in a photograph that one of our writers posted on Twitter."

But it's the episode where Jeff kissed Annie that keeps the fans talking. And Alison acknowledged, "Their flirtation is not over." She offered up, "Annie holds a little flame for Jeff… There is a bit of a push and pull between the two of them. And actually in this [latest] episode… there's a bit of that tension there throughout the election. I think that their bumping heads fuels more of that. Any time they’re together there's a bit of that because it can’t exist or because it's controversial I think that makes it dangerous and interesting. And obviously to Annie it's exciting to have a crush on an older guy. And she continues to try to challenge Jeff in that way. So their spark is not totally dead… But we shall see. We'll have to wait and see if it's going to amount to anything in the future."

But if things don’t work out with Jeff, Alison and Danny conceded there most likely won’t be any romance with Annie and Abed.

Alison suggested, "Abed [is] such a platonic member of the group… I know we talk about every viable sexual candidate for everyone else. But I do feel like there's some bond that everyone in the group as with Abed."

Danny agreed, "Abed knows the dangers of what happens when the group gets all mixed up. He's seen that. And he's warned Troy, for instance, about being roommates. So they don’t want to get too close because he knows what happens when best friends are roommates as well. So I think he's trying to stay out of their [way]… But who knows, every episode we’re always surprised at what we’re doing."

Tune into Community for more surprises on Thursday nights at 8 p.m. EST/7 p.m. Central on NBC.

For related stories check out:
Yvette Nicole Brown and Malcolm-Jamal Warner on Community
An Interview with Jim Rash from Community