The Good Wife Relies on the Internet for Plot Ideas 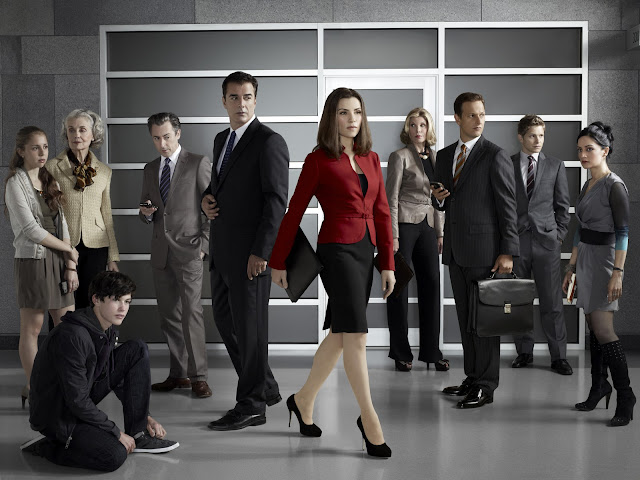 The CBS drama The Good Wife was originally created based on real life drama — namely political scandals and the women that stand behind their men. The main story swirls around Alicia Florrick played by Julianna Margulies, but the underlying legal plot lines are also ripped from the headlines. At a recent press event we spoke with series creators and producers Robert and Michelle King who talked about coming up with plotlines, staying true to real life legal proceedings and how the election timeline will play out.

Some viewers are critical of the show because the legal proceedings are not 100% accurate to real world scenarios. Robert reminded those naysayers, "It's always a balancing act between technically what you want to talk about and what you really want to do to keep the stream of the plot moving."

Michelle added, "There are three lawyers on the writing staff, and then there's also a lawyer tech advisor we turn to.  So it's always that balancing act of trying to get it right and still be dramatic."

Robert interjected, "We'll fall on the sword on that because usually they'll say, 'That rarely happens.'  We'll say, 'All right, well, f*@# it. It's TV. Let's try it and see.' Because it's always about putting characters in extreme circumstances."

Still much of the series is believable and accurate including the current election storyline that sees Alicia's husband running for office after clearing his name. The producers discussed the timeline for the election this season and when fans will finally see the results. Robert explained, "What we probably did was slide it a little more because we found we were enjoying Anika Rose, who plays one of the candidates, this third candidate who comes in. And we're always enjoying Titus Welliver, who plays Childs. And there are some moves in between now. But he promises, "It will happen before the end of the year. In fact, probably closer to now than the end of the year."

Like the origin of he show, many of the series' plots are pulled directly from the headlines. Robert admitted, "The Internet is such a great resource. If you spend a lot of time watching, flipping through it, every day you'll come up with some things."

He continued, "The difficulty is you have to think ahead, I imagine the way magazines think ahead. We knew WikiLeaks, when we were in the summer, would be hitting in a big way because Julian Assange didn't seem like he was going away. So we made that the first episode knowing, even though we were shooting it in… July, that it would broadcast in September... So you have to think 'What issues are going to stay around?'"

He talked about the relevance of another upcoming episode, "Gary Cole is coming back to play this character McVeigh that is a very conservative ballistics expert. And some of the issues obviously that are on everybody's mind now are the ratcheting up of political tension and political speech... And so he's a Tea Party member, and that becomes part of the debate between these two people who are in lust with each other and how it's unfortunate that you're a bit opportunistic, but you really want to explore the issues, too."

There are many more legal and political issues that intrigue the husband and wife team, which will find their way into future plotlines. Robert expanded, "One thing we're really fascinated by is the impact of the Internet on not only law, but the world. We have an episode coming up where it's about, the turning over of names to Chinese authorities by Internet companies that want to work in China. That sounds so dry, but of course, it will be all the twists, hopefully, that we usually apply in comedy. And the other thing is a what-if… the man Social Network was made about sued? So things like that. We're just interested in how the Internet applies to modern reality."

Julianna Margulies also stated her feelings on the relevance of the World Wide Web, "From my point of view, all the bad things that have really happened is from the Internet. If you really look at it that way, it kind of is. Because all of a sudden, [Alicia] sees on YouTube the horrible acts that her husband committed with this girl. And then you see her kids — seeing them bet against whether they're getting divorced or not. That seems to be the perpetrator."

One thing is for sure, you can expect the unexpected when it comes to The Good Wife. Robert credited his writers for this, "We have a great writers’ room, and what we've always thought is people watch TV differently now. Either they watch one episode or they'll get the DVDs and watch it all in one go… What we love, the idea is that if you did watch it all as one novel… there might be one twist per an episode, but you would love it that way, and then you could love the individual twists. So it's complicated. But for some reason, I think we clicked in mentally with it. It was very complicated the first year, because we were still trying to negotiate with ourselves what the show was. But for some reason this year, it's much more fun. I think it's partly the way the actors on the East Coast are influencing us on the West Coast."