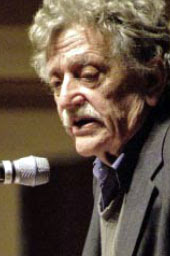 Many authors will work tirelessly and still never write the great American novel in their lifetimes. The same cannot be said for Kurt Vonnegut. First he delivered numerous works of incomparable fiction like Breakfast of Champions and Cat’s Cradle during his five-decade career. And now four years after his death, he’s given the world another gift — the short story collection While Mortals Sleep

. And we have to admit, the 16 never-before-published pieces, may be our favorite Vonnegut writings ever.

His first short story, called “Report on the Barnhouse Effect,” was published by Collier’s Weekly on February 11, 1950. And while he wrote other pieces for the magazine and publications like The Saturday Evening Post, the stories in While Mortals Sleep were never released — whether they were never submitted or simply rejected, no one knows for sure. We’re going with the theory that Vonnegut held them back because we find it hard to believe that anyone would have said no to these gems.

The title story about a crotchety old newspaperman forced to judge the annual town Christmas light competition straddles the line between a laugh-out-loud humor piece and a nail biting Nativity-theft thriller. “Jenny,” the story of a lonely old refrigerator salesman is heart-wrenching. And “With His Hand on the Throttle” will make any hobby-widow wife want to pick-up a sledgehammer to her husband’s ultimate source of distraction.

We can only hope there’ll be more unpublished jewels unearthed in the future.