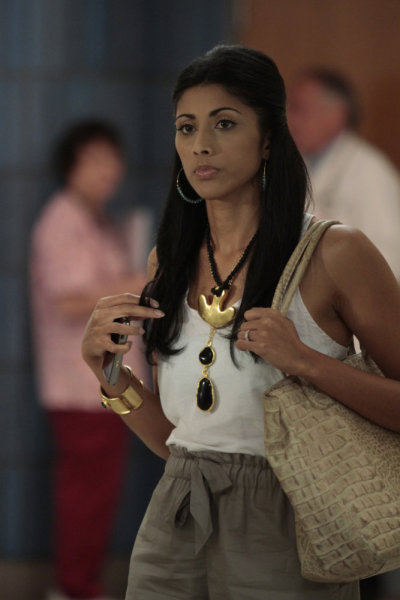 On the USA Network series Royal Pains Reshma Shetty’s character has to lie to her parents about being a Physician’s Assistant. Despite the fact that she had dreamed of a medical career since the age of six, her conservative Indian folks insisted that she earn an M.B.A. so that she could work with her fiancée-to-be in an arranged marriage.

In a strange twist of fate, Shetty herself had planned on studying medicine before destiny intervened. In a recent conference call interview she revealed, “I did want to be a doctor all through my high school years. Science club president and all of that and went to school for pre-med.”

But she also had an interest in the arts. “I’ve always been playing musical instruments from a very young age. From about seven, I started piano. When I was in high school, I found out I could sing. I preferred to be on a stage than to be in the orchestra pit. Because I played violin at the time, so I was usually in violin, first violin. So you just get that burst onstage.”

Still she never intended to make singing a career and was only doing theater for fun while in college. She divulged, “When I went to college, I just decided to keep it up as a hobby. I got into the musicals and the operas. Then I won a vocal competition while I was a bio major, which kind of stunned most of the people. It was a state competition. They didn’t know where this kid was from. Here was this bio major, and she’s beaten out all the music majors … attention.”

Luckily for Royal Pains fans, some people close to Shetty encouraged her to pursue opera. “I just had mentors come into my life who pushed me in this direction… I wish that I’d gone into straight drama earlier in many ways. But I always had the fear that because of typecasting, opera they don’t look at your color… If you can sing, you can sing. You can play anything. There weren’t as many opportunities at that time. So I kind of felt that it was a better route to take. And I could hit really high notes. And, I was an attractive, non-overweight opera singer. And it gave me a lot of confidence in that area.”

But when she arrived in Manhattan to pursue her dreams, her focus shifted to the theater. “When I moved to New York, I didn’t do any opera… I got a commercial agent before I came, started to do commercials. Then I did a musical, two musicals and then did a play.”

. She recounted how she was cast in the show. “When I got to New York the first thing I heard of was that they were doing the auditions for the national tour of Bombay Dreams. I jumped on the audition and… thankfully I got the lead girl in it. I got to experience the musical. And, I got to travel the country doing it. It was very fun… And it was great to bring a bit of Bollywood… to the Mid-west.”

Shetty’s big break on television came soon after. She noted, “Then I got Royal Pains. So drama’s always been there from the beginning… It wasn’t in the forefront.”

Unlike her Royal Pains character, her family was cautious of her career shift but supportive nonetheless. She explained, “My parents are traditional. They are from a line of doctors. So that’s all they knew. And they were scared. I mean they wanted to support me. But it wasn’t the easiest to sell. ‘Hey, Mummy, I really want to be an actress.’ It was a bit difficult. But, as I said, they were really great with it. Obviously, now they’re happy about it all. But still… being a doctor… it’s a job, too, that people look up to. And it’s respectable in their eyes. So it was a hard sell.”

Clearly Shetty’s doing a respectable job in the entertainment field. But what’s next for her? She remarked, “I would love to do a meaningful movie. I would love to do a comedy… I think that to have Royal Pains on is great. And I think that definitely Los Angeles next year is going to be a place that I will go to and spend a bit more time than this year. This year I have stayed in New York because I’m getting married. So it was not a time for me to actually go the West Coast… And I hope at some point, [to return to the] stage. It has to be something very special to me. But I definitely do miss the stage.”

Until then catch Shetty when Royal Pains airs on Thursdays at 9 p.m. EST/8 p.m. Central on USA.

The Most Dramatic Chris Harrison Interview… EVER