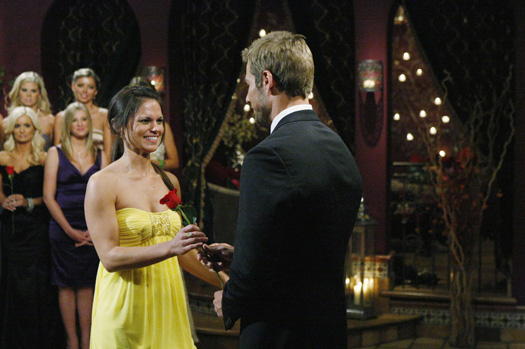 In last week's episode of The Bachelor mortician Shawntel Newton was sent packing after her hometown date with Brad Womack. Shawntel felt compelled to "lay all the cards on the table." But "the table" was an embalming one and she decided to lay Brad there as well. She brought him to her morgue and showed him how the process works, just for fun. Viewers knew it was the beginning of the end. The final nail in the coffin came when Shawntel dropped the bomb on her dad, that if she married Brad she would not be taking over the family funeral home business as she had promised. When Brad realized he was breaking up the family, he cut Shawntel lose.

We spoke with the ousted bachelorette in a recent conference call interview about her predictions for who she thinks Brad will choose, if she has any regrets and her life after The Bachelor.

The funeral director from Chico, California, divulged that during the last rose ceremony she was completely taken by surprise, "I was really shocked because when he called up Ashley [Herbert]… I personally had thought she was going home. And I thought I was going to be the one staying… I knew that she hadn't told him that she was falling in love with him and I had. And I was just like, 'OK he's letting a girl go that has put herself out there and has really expressed that she's in love and willing to leave her life here in Chico and go to Austin, when you have another girl that hasn't.'"

But she has no regrets opening herself up to Brad in that way. She noted, "It was already an uncomfortable situation telling him, that I was not only falling in love but then at the end after he met my family that I'm in love, because I know that he can't say that back to me… But I put myself out there and I said, 'You know what, I want you to know this is how I'm feeling.' And that's who I am.' I'm very comfortable with my feelings and telling people how I feel. And I wanted him to know."

Yet despite her vulnerability, Brad still let her go leaving three women behind — Emily Maynard, Chantal O'Brien and Ashley Hebert. Shawntel has a strong feeling about who Brad will choose stating emphatically, "My personal opinion is he is in love with Emily. And I think he has been for a while."

She continued, "I ignored that when I was with him. There was a rose ceremony where we were all sitting down and he asked Emily to step aside with this beautiful basket of wine and cheese. And it was hurtful… And I even said, 'Are you ready to go get married now?'… I think Emily's everything he wants. She has a child and I think he wants to be the father to her child.  And she's wanting to get married and have more kids. And he loves that and wants that."

Although she did suggest, Brad has an uphill battle if he chooses her. "Emily has a lot of strengths. She's a strong woman for this tragic incident that happened in her life with her fianceé at the time… And when she would talk about that, sometimes I would be like, 'My goodness this is the love of her life and that will be with her for the rest of her life.' And Brad even said this to her, 'That's hard to live up to. You've had your love of your life who, sadly, passed away. And to replace that, I don't think will ever happen.' And so that, for Brad, is probably a scary thing."

Still Shawntel doesn’t think that will prevent Brad from choosing Emily. She also described the reasons why the other two finalists are not right for The Bachelor, "For Chantal her emotions are getting to her. They have been on the show. But [with] the situations we're put in, it's so hard not to. Unfortunately, I think they've gotten to her. But she's an amazing… girl that I got really close to on the show. And she cares for Brad so much and she was the first one to tell Brad, 'I love you. And I'm here for you and I already have these feelings.' And I think Brad was attracted to that, her honesty with him."

And despite that fact that she thought Ashley is "fun and spunky and makes anyone feel young and lively," Shawntel claimed that Ashley was too needy. "She would constantly say to him, 'I need that reassurance. I need that, I need.' OK well we all want that. Every single girl here wants that reassurance. And he knows that. And you keep using this word in these situations we're put in, but it's the truth. These are very abnormal situations. But she would constantly say 'Where's my reassurance?'"

Shawntel actually seemed like the one woman in the house who needed the least reassurance. Perhaps that was because she had never seen an episode of The Bachelor before she signed up to appear on it. Her younger sisters applied for her and she went in blind. She acknowledged, "For the most part I think it was better that I had no expectations going into this. A lot of the girls were like, 'We know when the date card comes.' And I was like, 'I don't even know what a date card is.'  And I think it was better that way to have no expectations on the show and to just go with it."

And now that she's had The Bachelor experience, she said she would consider being The Bachelorette if asked. She commented, "I think to be The Bachelor or The Bachelorette you really have to be a strong emotional person and as we can see Brad was. This was his second go around and you are talking a lot. You’re doing a lot of interviews. You’re up late and you need to be able to handle that and I am one that could do that."

She said there is one quality needed to be The Bachelor or Bachelorette, "Being emotionally stable because when you’re The Bachelor, Bachelorette you have a lot on your plate. And I think I could handle [that] because sometimes I think oh, 'My gosh, this would be really hard and gosh it would be just a lot.' But I think I could emotionally handle it and still show emotion obviously and definitely be there to fall in love with someone that knows that I’m a funeral director and hopefully they’re comfortable with that."

Shawntel discovered some of her own skills that she used to go far on The Bachelor and that would come in handy on The Bachelorette, "When I went on to The Bachelor I was already a pretty strong person. Being a funeral director it helps with that because I have to control my emotions when I’m a funeral director. I have to professionally separate myself from these families… And I did really well at doing that. As I watched myself… I’m very proud of myself and how I handled these weird situations."

She pointed out one experience Brad was lacking in his Bachelor journey that she could bring to the show, "He wasn’t a contestant [on] The Bachelorette at all. He was just a Bachelor. So a lot of the girls would say to him, 'You don’t really know how we’re feeling in this situation.' And that was something that he didn’t really understand… we’re watching you go on these other dates with other people and we’re telling you that we’re falling in love and he couldn’t compare to that. He couldn’t say I know how that feels."

And she did have some advice for other women considering going on the series, "It's something that you really need to think about because it's a really true test of your character. That's what I learned from myself, coming back from the show… You're secluded from your family and your friends and you really only have yourself to… And so it's not that I wouldn’t recommend it, but it's something that people need to think about and realize, 'Okay, these situations I'm going to be put in are not normal. And am I going to be able to handle that or not with cameras in my face?"

Shawntel carried herself well and even though she was not chosen in the end, she walked away from her time with Brad with a better idea of what she wants in a her next boyfriend. "Here is this wonderful independent man, which I was very attracted to… He’s just a southern gentleman. Not that I have to marry someone from Texas, but his manners were something I wasn’t used to. And I just really felt like a woman when I was with him. And he was funny and yet he was very serious as well. And he didn’t look at my job like it was too weird… He wanted to know more and so he’s really set my standards as far the next guy I’m with."

She reflected that she is ready to move on, "I compare this a lot to someone who has had a death and has lost a loved one because we go through the same stages as you do with a death. So with me losing Brad I allowed myself to get angry, to start bargaining and wonder, ‘gosh could I have done something different,' almost in denial maybe. And I allowed myself to go through these different stages of grief in a healthy way."

She professed, "I'm not in love with him anymore. And like I said in the limo… I wish Brad the happiest. I thought he was just an amazing person. And all I want for him is to be happy. And I think he got really lucky with the girls he had to choose from because he had some really great girls there."

Find out who Brad chooses on The Bachelor on Monday nights at 8 p.m. EST/7 p.m. Central on ABC.

For related stories check out:
Bad or Just Drawn that Way on The Bachelor?
Ashley Spivey Dishes on Her Bachelor Exit