Blair Underwood and Zeljko Ivanek Talk About The Event 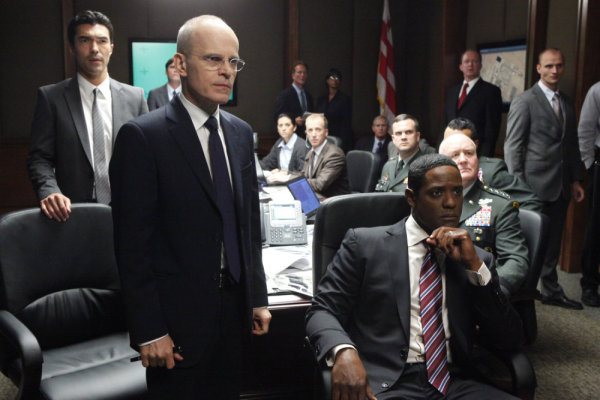 Fans of The Event will be happy to hear the series is returning next Monday, March 7, after a three-month hiatus. We originally tuned into the show because we were fans of Jason Ritter (have we not mentioned our Joan of Arcadia

obsession?). The actor plays a man looking for his kidnapped fiancée. Although the flashbacks and time changes were a bit difficult to follow initially, we stuck with it and discovered that the various subplots run deep into a government conspiracy to hide a 60-year-old group of alien detainees. The twists and turns reminded us of what we liked about Lost

without all the unanswered questions, since the producers are determined to not leave fans hanging too long.

At the center of the alien cover-up sits Elias Martinez, the President of the U.S., played by Blair Underwood, and Blake Sterling, the Director of National Intelligence (Zeljko Ivanek). We spoke with the two men recently about what real life politicians influenced their roles, the challenges in playing the parts and how their characters have evolved over time.

Playing the President can be difficult for an actor because they are often compared to real life counterparts. Blair was quick to point out, "I want to make sure I always say that, of course, I’m not playing the current President... But you can’t help but be aware of, and possibly influenced by, the fact that you have a youthful, family oriented, newly elected president... But also I’ve gotten… so much more interested in watching historical… documentaries. I was watching one on President Reagan last night because now it’s a whole different perspective on that life lived inside the walls of that White House and behind that Oval Office desk."

He said he does use this material for reference when developing the character of Elias Martinez. "I find myself pulling different pieces here and there. And there’s always the person that the President is and then there’s how the President is perceived. And it does influence how you portray a character… One of the things I wanted to be sure to do, or hopefully will do more of, is show his patriotic side — how much he loved this country. And I think sometimes you have to state that. You assume if someone’s the President that he is that and feels that way, but sometimes it’s important to say."

Zeljko also looked to actual politicians for inspiration, acknowledging, "I read the first script and started seeing what this world was like. There was some obvious real world models to look to, like Dick Cheney and Donald Rumsfeld… Just before we started the pilot I happened to read a book called The One Percent Doctrine about politics within the Bush Administration following 9/11. And a good deal of it is about Dick Cheney saying if there’s a 1% chance of something happening, then you are justified in basically taking all measures to prevent that from happening if it’s a threat to you. So that was very useful and the… bureaucratic politics that go along with that were all useful information going in."

But he conceded, "At some point, the real story and the show takes over and the real relationships take over and you leave all the rest of that behind, but suddenly you’re dealing with a very, very specific new set of circumstances. So it was certainly an inspiration looking to real life characters like that, but at some point you’re in the world of the show and that takes over."

Underwood related that he learned one important lesson about the Commanders in Chief from his historical research, "They’re all so different. Their personalities and their backgrounds make them all so uniquely different. So that was important to understand. People talk about being presidential. What is presidential? And to me it’s someone who can engender trust and people will believe in him to follow his gut and his instincts to lead the country in the right direction, whatever that means. That’s different for everybody. But you have to believe in that person. Beyond that, it’s trying to be as truthful and as honest and sincere as possible to do whatever you feel is the best way to lead a country."

And playing politicians has given both men a new perspective on government. Zeljko commented, "Watching what just happened in Egypt… Just that shear momentum of events coming at you and finding yourself in the middle of things that are just moving way faster than the human mind can really process. I’m not comparing this [series] to reality, but it’s certainly within the world of the show. We’re having to constantly reassess what’s going on and within every episode… And the sensation of the pressure and this caldron that they’re all in is really, really vivid to me."

Blair agreed, "It makes me think not only of Egypt but Iran last year and everything that’s always going on in the world’s stage... Just the sheer weight and gravity of the office and the responsibility of the President of the United States, how daunting that must be to try to sift through that and try to stay one step ahead of what’s really going on. So it’s definitely given me more of a keen awareness, if nothing else, and interest in the world of politics and foreign affairs."

But aside from the pressure of playing a politician, there are other challenges that come along with the roles on The Event. Zeljko remarked, "What I always liked from the beginning of the show was just how strong these characters were and how many different worlds you were following. And at the same time there’s this overwhelming story ark going on."

But he did admit is can be difficult as an actor looking to develop his character, "Sometimes you feel everyone’s needed to push the plot along and then [other times] you want to raise your hand, it’s like, 'Yes, but what’s going on inside of me at this moment?' And you don’t always get to play that out fully. Luckily there’s plenty of moments and plenty of scenes where the reverberations among the characters, and how they are each individually struggling with these things, are played out. But there’s also a good deal of time where we just are looking after this juggernaut of a story that everybody is dealing with as best they can and sometimes that just has to take precedence."

Blair also revealed a predicament with his role, "It seems like a very simple thing but it’s to not get caught in the trap of being presidential in playing this particular character. And it can be a trap. When you start to play for results and just make him as human as possible. It’s a subtle nuance and it’s all in how you approach it, but it can be a trap for an actor. The same way an actor tries to be intelligent or smart… it’s all playing for results and not doing that because everybody has their idea and notion in their own heads and minds what a president should be."

And as is typical of a president, President Martinez began the series sticking to his convictions, but through the course of the season, extraordinary circumstances have found him straddling the line of right and wrong. But Blair contended the president will not lose his values as the aliens become more dangerous. He replied, "I hope not. I can say we haven’t yet but I mean he’s tested… The story’s accelerated so fast and it makes us all question who we are. In many ways the overriding and undercurrent of the show is the idea of identity. Who are we and who are we in certain circumstances and as circumstances keep shifting and changing and evolving… He hasn’t lost himself… He’s rethought a lot of his values but he has not shifted as of yet; not to say that he won’t."

Zeljko added, "I think for him and for Sterling, and for a lot of characters, that people have found themselves doing things they never thought they would do. Whether that’s changing your values or just having your values confronted with reality. I’m not sure which it is, but certainly everybody has found themselves caught short in ways that they never anticipated and behaving in ways that they would not have predicted for themselves."

In the upcoming mid-season premiere episode Zeljko disclosed that there is a moment where Sterling is confronted with this very idea of shifting values. He noted, "[It] ends with a real moment of having to reassess his view of this whole situation and his view of the aliens and it just comes out of the events that happen that lead him to that. It suddenly put him in a place that… you never expect him to be in and gives him a shift in perspective. We’ll see if it lasts and how circumstances affect it but there’s a real moment of clarity for Sterling that he didn’t see coming."

It is this constant changing of perspective that makes playing the character interesting for Zeljko. He stated, "The assumption was, because I was playing this part, automatically he must be the bad guy in all of this. And I’ve been happy to find out that there are worse guys lurking in this administration in this world. What I’ve liked is that things really change and shift gears as the season has gone on and there have been big changes and shifts in the relationship between Blake and the President, which has been really fun to work on as well. As things happen, they each change their positions and find themselves making the opposite arguments at each other than where they started. So I think I am anybody who reaches a position like the one I’m supposed to be holding, I’m sure has a lot to answer for but, at the same time, he’s clearly a patriot and clearly is trying to save the world. And then you get into the nitty-gritty of what is he willing to do to do that. And that’s the crux for a lot of the characters is how far are you willing to go to protect the things you think need protecting? And we’re constantly challenged as the storyline ratchets up the stakes."

Zeljko also hinted at big changes to come for the president, "Just stay tuned because there’s some major, major challenges coming at him and I think you may find how he reacts to them is not what you might have expected."

To see the twists and turns for yourself tune in to the second half of season one of The Event for a two hour episode on March 7 at 8 p.m. EST/7 p.m. Central on NBC.

For related stories check out:
The Community Cast Doesn't Always Get the Jokes
Royal Pain's Reshma Shetty on Almost Being a Doctor in Real Life