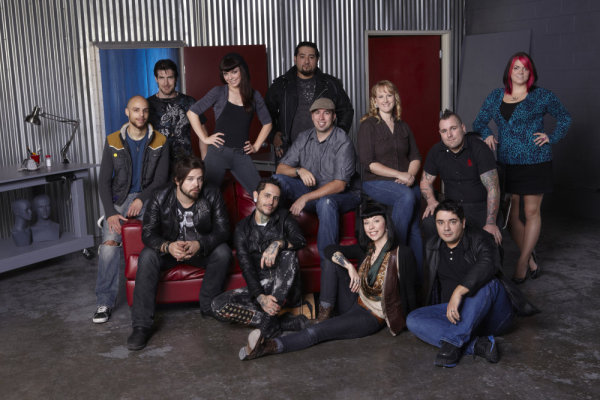 Now that The Fashion Show is done for the season and Top Chef All-Stars is getting close to the end, we need a new competition series to fill the void. Enter Face Off, Syfy's answer to our reality TV woes.

If you haven't tuned in yet, it airs on Wednesday nights and pits 12 special-effects make-up artists against one another in weekly challenges like full body paint and creating a half-human, half-man creature.

and Buffy the Vampire Slayer

The host of the show is McKenzie Westmore, an actress from the NBC soap Passions, whose dad and grandfather were big names is the make-up profession. Her father, Michael Westmore, designed all he faces and creatures from the Star Trek

And for the artists at home watching, Syfy is holding an online contest. You have six days left to submit a photo of your creepiest creature or crazy alien. Five finalists will be posted on the Syfy site and users will vote for a winner. That lucky make-up artist will win a MacBook Pro, Pixologic's ZBrush digital sculpting and painting software, a Wacom Bamboo Pen Tablet, a Monda Studios trolley stackable make-up case and a Royal & Langknickel 20-piece brush set. The five finalists will also get the case and brushes. For details visit the Face Off website.

And if you aren't gifted with a make-up brush you can still have some fun creating creatures with the Facebook Face Off Challenge app. Transform your pictures into fantasy and horror creatures.

For related stories check out:
Tiffany and Debbie Gibson — Giving the People What they Want
An Interview with the Cast and Crew of Being Human