Bobby Flay Will Bring Us America’s Next Great Restaurant 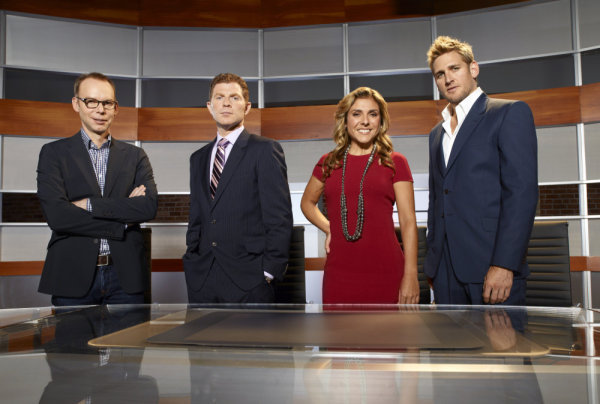 This weekend America’s Next Great Restaurant premieres on NBC. Not only will the winner get a three-restaurant franchise based on their show, but they’ll have four really impressive backers. The series’ judges, celebrity chefs Bobby Flay and Curtis Stone, Chipotle found Steve Ells and Latina culinary artist Lorena Garcia, are also investors in the chosen eatery. In a recent conference call interview, Flay and Ells talked about advice for contestants, the importance of problem solving and tasting bad food on TV.

Ells gave a little background on what makes a successful restaurateur, saying, “The most important advice is to really convey a sense of what it is that these folks are getting into, what the restaurant business is really about. That not only does it take a great idea, but it takes lots of other skills — the ability to build a really strong team that can execute their vision. It takes a lot of hours, a lot of hard work. It takes the ability to be able to communicate with customers and vendors and solve problems.”

To prove their point to the hopefuls, Ells explained that the challenges were built around these key issues, “A lot of the different competitions that the contestants went through really gave us the ability to see if these contestants have good problem solving skills. Because every day in a restaurant you're thrown all kinds of challenges that you would never be able to anticipate. So the ability to watch contestants be able to figure things out under pressure was really great. And so we shared a lot of our own experiences with them and helped them along the way.”

Flay was also interested in the contestants’ motivation before he’d be willing to back their dream establishment. He divulged, “Basically what I wanted to know from these people first and foremost is why they wanted to do this. Did they want to do this because they wanted to be on television, which obviously was not going to work for us? Do they want to do this because this is really a lifelong dream of theirs? And if so what has caused that? Is it something in their family in terms of coming up with a great meatball recipe for instance and wanting to sort of spread that across the country? So for me the real question is why were you doing this and what is driving you to basically commit your entire career and the rest of your life to making this work?”

That said, prospective competitors didn’t need decades of restaurant experience under their belts to make the final cut. Flay revealed, “You didn't have to be a food service professional to pitch a concept. You could be a schoolteacher. It didn't matter. It could be anybody.”

Needless to say, casting a wide net can sometimes lead to catching some pretty crazy fish. Flay continued, “We were told… there were some pretty outlandish ideas. But for the most part we knew that ultimately we needed a good restaurant idea that would actually work and one that people would understand because otherwise we'd just be throwing our money out the window.”

And Flay does mean “our” money. He and his co-judges Ells, Garcia and Stone are also backing the winning establishment. “As investors the four of us basically operated on our own volition and then let the TV take place around us… It's going to be a television show, but basically that's not what we were there for. We were there to find a really great restaurant idea.”

Of course at the core of any great restaurant is the food. Flay described his process, “I start with food first, because I'm a chef by trade, and basically that's how I spend my time in the restaurant being in my whites in the kitchen. And so of course, food is very important to me. Now that doesn't mean that I can't see through a dish that somebody is serving us that may not be perfectly seasoned or have the perfect technique… These people weren't necessarily chefs. But, every once in a while, there was something that was just a little bit more difficult to eat than others.

Ells recalled a particular moment from the ANGR trailer, “I was watching over, and Bobby was about to take that bite, and I almost reached over to grab his hand to stop that spoon from going into his mouth. I just I couldn't get there in time, and we all say it coming, and I'm like, ‘No, don't eat it.’”

Although that recipe will most likely not be highlighted, Flay said he believed that some culinary knowledge will be conveyed on the show. “There are definitely cooking skill tests, and there's definitely things that you'll learn from watching some of the contestants who do a good job with their food.”

To pick up a tip or two and watch as the next culinary destination develops tune in to America’s Next Great Restaurant on Sunday nights at 8 p.m. EST/7 p.m. Central on NBC.

Spy Magazine Sneaks Back Onto the Internet


So Many Reasons to Love Henry Winkler