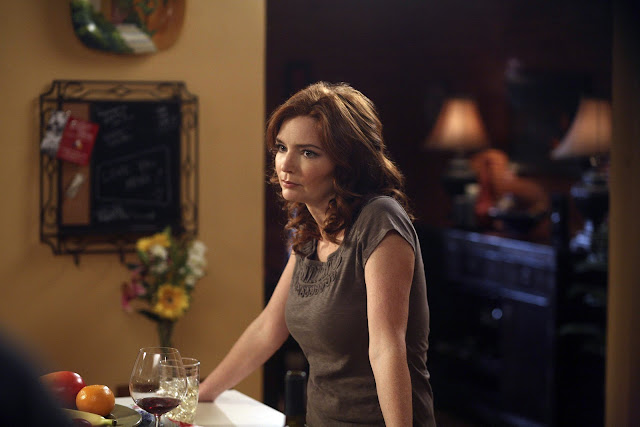 Army Wives, Lifetime's military drama, was back this week for season five. And in one of the major story arcs, Brigid Brannagh's character Pamela Moran has some big choices to make.

Last season Pamela and Chase, her Delta Force husband, split up causing her to move away from the Army base that she had called home. Now Chase wants to come back to her and has agreed to give up his dangerous Delta Force work that sent her packing in the first place. But of course, it's not that simple. She also has an offer to become a detective (a lifelong dream for Pamela) and her partner on the force has just professed his love. A tough situation to be in, for sure.

But these scenarios pale in comparison to what real life Army wives go through on a daily basis. In a recent conference call interview Brigid spoke about the actual women facing life in the military. She admitted, "Quite honestly I’ve learned that they’re a lot tougher than I am. They have a lot more patience."

She also expressed that she believes it is their sense of humor that keeps them going, saying, "They’re some of the funniest women I’ve ever met in my life because they’re dealing with a true life and death reality all the time. And so when they laugh hard, they laugh really hard. When they’re in a lighter mood, I don’t think anyone can beat them." She added, "I’m a wimp in comparison."

The actress related that she films the series in Charleston, North Carolina, but her home is in Los Angeles. She said that being away from her husband for long chunks of time is difficult for her. But she commented, "Their husbands are at war for a year and a half. And they do it with pride and grace. And then when their husbands come home they meld back into the family life that is run by a couple instead of one." She remarked, "I have all the admiration in the world for Army wives."

Brigid noted that the cast does various events and charitable functions that are hosted by real life Army wives. She declared, "We come and lend a hand here and there when we can and schedule allows. And they’re great."

"One of the things I’m most proud of with Pamela is that she’s really down to earth and a little acerbic, if you will." She explained, "All the Army wives that I knew are a little bit like that. And these Army wives I’ve met are truly, I mean they’ve traveled a lot, their husbands travel a lot. They’re very loyal people but they’re also really worldly, too. They’re just amazing women."