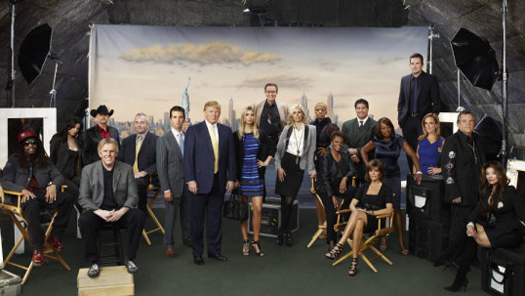 We are so excited for Sunday's premieres of The Celebrity Apprentice. We should know better than to get sucked in to misleading trailers that promise more drama than they deliver. But from what we can tell from a recent conference call interview with the show's host Donald Trump, music legend Meat Loaf and The Real Housewives of Atlanta's NeNe Leakes, this season's competitors pack a punch and are going to bring the best season ever.

The cast is a great one, although we expect nothing less from Mr. Trump and genius Executive Producer Mark Burnett — Gary Busey, David Cassidy, Jose Canseco, Hope Dworacyk, Richard Hatch, LaToya Jackson, Lil Jon, Star Jones, NeNe Leakes, Meat Loaf, Marlee Matlin, Mark McGrath, John Rich, Lisa Rinna, Niki Taylor and Dionne Warwick. And while we assumed Gary Busey and LaToya Jackson would be the ones to watch for edge of your seat reality TV, it turns out Meat Loaf and NeNe are at the center of the histrionics.

We asked The Donald why he thinks The Celebrity Apprentice is more successful than the non-star version of the show and he replied, "The public can relate to them."

He continued, "To do the regular show, you have to be almost lucky with the people. And more importantly it takes five or six or seven nights before people get to know who they're watching. Whereas with the celebrities they know them immediately."

Trump also admitted that he likes doing the celebrity version better, "I really like dealing with people that I've watched over the last 20 years. I've watched these people whether it's Marlee Matlin, or Gary Busey, or any of them. It's an amazing cast. Personally I like doing it better. And I think the audience probably at this point likes it better also."

He also said in the beginning it was difficult to get stars to agree to do the reality show. But now that the series has contributed to career upswings for players like Joan Rivers, Piers Morgan, Trace Adkins and Bret Michaels, the celebrities are lining up for a shot. He stated, "Now we turn down five for every one that we take. Everybody wants to be on because even if they don't make it all the way, their brand is generally helped."

He expanded on the thought, "Now some don't do very well and frankly, you can’t have everybody do well. But for the most part when they do well and if they're smart, if they have confidence in themselves and they help their charity they are really helped and everybody wants to be on."

Trump also discussed the concept of casting a villain. This season Richard Hatch, the winner of the first season of Survivor and infamous reality TV bad guy, was cast on The Celebrity Apprentice. Fans assumed he would take on that role for Trump as well. The host noted, "Richard really is a tough player. He's a very smart guy. And I think a lot of the team including Meat Loaf and NeNe really had their eye out for Richard because of the fact he did so well with Survivor. He survived in a format that was a similar type format. A lot of people were looking at Richard as being somebody that I don't necessarily say as the villain but they were looking at him as being somebody that was a very capable player. And he really is a very capable player."

Meat Loaf recalled, "They kept putting myself and Richard Hatch together in the same car with nobody else all the time. And they'd make us wait together. And I just I have a really National Lampoon sense of humor. And I just kept winding Richard Hatch up constantly.

But he confessed, "I really thought, 'I'm not going to like this guy,' based on what you'd seen on TV. And as we progressed I said to him near the end, 'You know what? You changed my mind. I really like you.'"

Meat Loaf also commented, "The way you judge people is by their friends or their children or how they've done. And his friends came so strong for him in the show and how loyal they were to him I realized that this guy he's got this character and it wasn't him. He's a good guy. I like him."

The singer also judged Mr. Trump by the same standards relating, "Mr. Trump's three kids are spectacular. They're polite, they’re kind, they're very bright, but they're very down to earth at the same time. And I have so much respect for Mr. Trump and his kids it’s unbelievable."

Trump also praised some of the other contestants, like Marlee Matlin, "She's a strong smart person. And I think frankly she sets an amazing example for people that have to go through what she has to go through. It's not easy. And she's amazing."

He divulged that he and some of the contestants tried to learn to sign to make it easier for Marlee on the show. He professed, "I actually gave it a shot. It's not easy. It's very tough. I think NeNe was there when I was doing it but it is not easy."

NeNe agreed, "It's not easy… I will tell you this, I worked with Marlee a lot. And whenever she would sign I was so intrigued by it. She's just interesting to watch when she's signing. It’s so beautiful when she does that. I actually pretend to sign but I don't know how to sign, no."

Meat Loaf also had a confession when it came to his hearing impaired castmate. "My problem is, when I worked with her, I would forget and I would just start talking to her and she’d look at me like and she’d say to me, 'I'm deaf.' And I go, 'Well I'll talk louder.'"

NeNe responded, "She has a great sense of humor. She really does." Sounds like she needed it.

As for the baseball legend Jose Conseco, Trump acknowledged, "Jose is a smart guy. I think he's going to come out really well. I mean he's smart, he's cunning… I think Jose’s going to come out very well. But he is a rough guy. He is very physical. He's a big strong guy but he gets very physical. He is quite exciting. Some of the things that happen in and around Jose wouldn't you say so Meat Loaf?"

Meat Loaf responded, "Yes it is. You just have to watch it."

As for NeNe's seeming rivalry with Star Jones, the Housewife recalled, "I definitely came out with friends and enemies and I'm okay with it. I really am okay with it yes. Everybody knows that I get in Star’s face… I'm not afraid to get in anybody's face. I will just have to say that. I'm just keeping it real with you."

She continued, "I dance, of course, with Latoya and I sign with Marlee and we had some great time. We have highs and lows. And I went in just really being myself and just expecting whatever happens, happens. And so I'm going to have friends and enemies when it's all said and done. But hell I've got friends and enemies now so it's okay."

Meat Loaf remarked, "I came out with friends and I don't believe that I came out with enemies… Maybe people I might be an enemy of someone, but I don't have any."

To find out which stars end up being buddies tune in to the season premiere of The Celebrity Apprentice on Sunday, March 6, at 9 p.m. EST/8 p.m. Central on NBC.