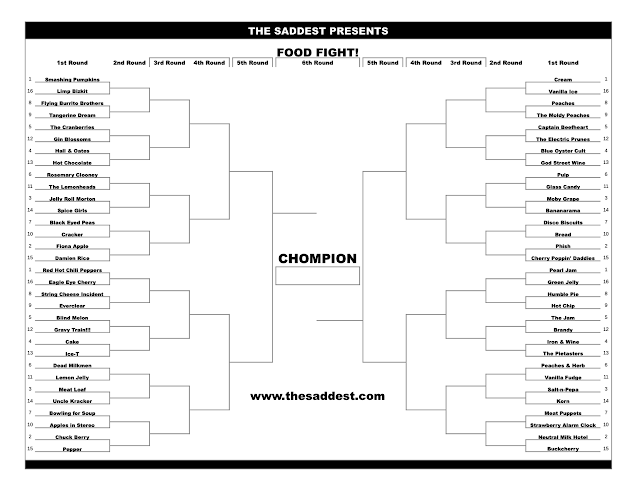 We always feel left out this time of year because we just can never seem to get behind the Final Four madness. While we love us some Olympic action and can usually muster up enthusiasm for the World Series and Super Bowl, the basketball series just leaves us cold. Now finally thesaddest.com has given us a bracket match-up that we can get our heads and hearts around — The Edible Bands Chompionship.

While the game hasn’t been brought into the 21st century in digital form, you can print out the chart and start a smackdown with your friends the old fashioned way. Do you think the Smashing Pumpkins would kick some Limp Bizkit butt? Do you prefer Bowling for Soup to Apples in Stereo? Are you have a hankering for plain old Peaches or The Moldy Peaches?

There are 64 food inspired acts in all. But who will be the sustainable treat that makes it to the Round Six Chompionship Title. Our money’s on Hall & Oates but you can never underestimate the nostalgic appeal of Meat Loaf.

Check out the action at http://www.thesaddest.com/post/3729211161/foodbandsfinalfour. But we warn you, don’t play on an empty stomach. This game will make you really, really hungry.

Spy Magazine Sneaks onto the Internet

Catch Cons with Your iPhone