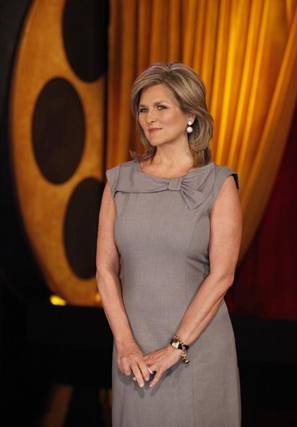 
Cynthia McFadden is an award-winning journalist but that doesn’t mean she can’t appreciate the lighter side of the news. The Nightline and Primetime anchor has done her share of celebrity interviews over the years and now she’s co-hosting ABC’s Best in Film: The Greatest Movies of Our Time with Tom Bergeron. In an exclusive interview she talked about the special and some of her all time favorite movies.

The top five winners in ten of the categories will be announced during tonight’s special and the remaining choices will be revealed online at www.abcnews.com/bestinfilm. McFadden admitted she wasn’t surprised by the overwhelming participation in the poll because movie fans are so rabid. But she confessed, “It’s been lots of fun to see how passionate the critics, the people who make the movies, as well as the public has been in responding to this.”

Whether devotees’ favorites made the list or not, McFadden said she believes that the poll is a true testament to the rich history of the movie industry. She remarked, “One of the things this really reminds you, is just how many amazing films we’ve all been privileged to see over the years.”

And not just contemporary films are represented. McFadden revealed that the special has something for moviegoers of all ages. She said the movies “range over the decades; it’s not just recent films, although there are some recent films. But they’re such winning moments and they’re like old friends I think.”

Among the old friends who’ll be part of the special is a long list of actors and filmmakers. The program features celebrity interviews with Gene Hackman, Susan Sarandon, Kevin Spacey and a slew of movie stars. Directors like Ivan Reitman and Nora Ephron and producers including Jerry Weintraub and Harvey Weinstein talk about their favorite on- and off-screen moments.

McFadden said of the interviewees, “They tell us things that at least I never knew before. I love that backstage stuff like who had bad breath and his leading lady didn’t want to kiss him. That kind of stuff. Good juicy stuff.”

And while she didn’t get to chat with Harrison Ford, she acknowledged that fans will love the sit down he did for the program. “I never interviewed Harrison Ford and he is interviewed in this two hour special and I was just mad as a hatter that I didn’t get assigned to this special until after he’d been interviewed. Yes, a crush, I admit it… It’s not just my prejudice showing, he does a wonderful interview, it’s just charming.”

During our interview we couldn’t help but ask McFadden to tell us some of her favorites in the various categories. She joked, “I feel like this is Jeopardy and I’m just never gonna ring my buzzer.” But she was a good sport and told us a few of her favorites.

McFadden offered up, “For comedy, I love Bringing Up Baby. Call me crazy but I just love those old Hepburn-Tracy screwball comedies. I love them.”

As for the Political/Historic Film category she divulged, “Gandhi is actually a film I sat down and watched with my twelve-year-old the other night. Watch it again if you haven’t seen it for a while. It’s just so brilliant and so shattering. Really a great film.”

McFadden also recalled her earliest movie memory. “The first movie that I ever remember seeing was The Wizard of Oz and I used to have to negotiate with my parents. Remember it would be on at night starting at eight o’clock but it wouldn’t be over until ten? So it took me years to ever get to the Technicolor. I went through the black and white year after year but when Technicolor would come up it would be like, ‘Bedtime, Cindy.’”

You don’t have to stay up too late to watch Cynthia McFadden co-anchor Best in Film: The Greatest Movies of Our Time with Tom Bergeron tomorrow night at 9 p.m. EST/8 p.m. Central on ABC. And pickup the latest People magazine on newsstands now for a story related to the special.

Sherri Shepherd Dishes on 30 Rock, the Real Housewives and The View

An Interview with Blair Underwood and Virginia Madsen