Ferrets: The Pursuit of Excellence 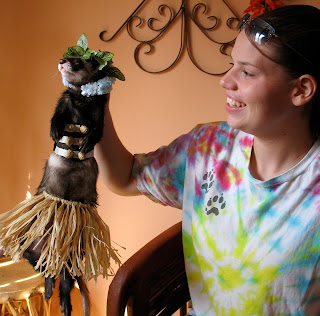 We admit we always thought we were a little odd when we would take our pugs Lydia and Norton to the occasional pug picnic where the highlight of the day's events was a costume contest for the dogs (we never dressed them up, we swear). But then we caught wind of a documentary airing on PBS on Tuesday, March 22 — Ferrets: The Pursuit of Excellence.

In this film by Mark Lewis, which originally aired on PBS in 2007, owners of the elongated mammals bring their beloved pets to Ohio's Ferret Buckeye Bash. At stake, prize and prestige at the most popular ferret event in the U.S.

The doc follows breeders, experts and ferret lovers through the parade and intense competition. Believe it or not the animals are judged on bone structure, muscle mass and temperament — and a nice tutu or hula bikini doesn't hurt either.

For related stories check out:
Tom Hanks is a Lot of Animals
Stars Twitter to Save Animals' Lives