An Interview with Blair Underwood and Virginia Madsen (VIDEO) 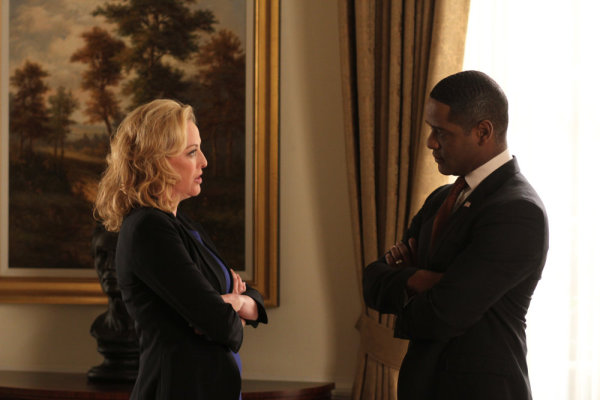 After long very long wait, The Event returned last week for the second half of season one. We spoke with series' star Blair Underwood and newest cast member Virginia Madsen about the show and life beyond earth.

Fans of the show may have noticed a few changes — first and foremost no more flashbacks. Blair talked about the shift in style noting,  "A lot of viewers felt that it was hard to follow and complicated."

Madsen, a fan of the show before joining the cast, interjected, "I liked that part." But Underwood explained that the use of flashbacks from here on in will be minimal and that the story will now be told in a more linear fashion.

But one thing about the show that will not change is the constant twists and turns in the plot. Both actors admitted that they like to see the plot unfold as it happens week to week rather than knowing their storylines in advance. Blair divulged, "I want to find out as the character finds out. And every time a new script is delivered... it's like Christmas."

Virginia added, "It's fun to not know. They could kill me off, which I hope they don't, I could be an alien. I don't know."

Virginia was introduced in the two hour mid-season premiere as Catherine Lewis who has just taken over her deceased husband's Alaskan Senate seat. And while she bares no resemblance to the real-life politician from the Land of the Midnight Sun, Virginia's character could prove to be just as influential since she has stumbled on the secret Alien prison camp.

And playing the character is not a stretch for the actress philosophically since she does believe in life beyond planet earth. She even admitted to having her own UFO sighting. Watch this video to hear all about it and see links below for the rest of our interview with Blair and Virginia.

Check out these other videos from our interview with the stars of The Event:

For related stories check out:
Blair Underwood and Zeljko Ivanek Talk About The Event
This Week's TV Premieres