An Interview with Outsourced's Rizwan Manji and Parvesh Cheena 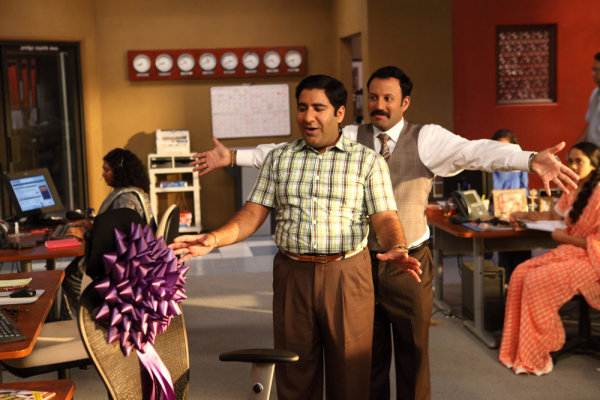 The NBC comedy Outsourced has spent the season firmly entrenched in the network's Thursday night line-up. And while the vets like 30 Rock, Community, Parks and Recreation and The Office have been renewed, Outsourced is still holding out for word on season two. While they await their fate, cast members Rizwan Manji and Parvesh Cheena talked about their characters and their influences in a recent conference call interview.

On the show Rizwan plays Rajiv Gidwani, the manager (in name only) at Mid America Novelties who makes no qualms about wanting to climb the ladder. Parvesh plays his office associate, the annoying but somehow endearing Gupta.

Parvesh admitted that he's the practical joker on the set and is always pulling gags on his fellow actors, especially Rizwan. He divulged, "Unfortunately Rizwan has been the brunt of many of my pranks… Riz tends to fall asleep during filming because we generally have 14-hour days… When you’re with people five days a week for that long of time you start to get a little silly. And so Rizwan falls asleep and our favorite pastime is to see how many people we can get behind him and take photos and videos of him."

Rizwan interjected sarcastically, "The most fun you could ever have. And taking videos of up my nostrils, which I think it’s really great. It’s up on Hulu, so that’s always wonderful to see."

Parvesh continued, "We have a good time. We’re a family… You have to tease your family. You tease the ones that you’re closest to."

This on-set family spends a lot of time together off camera as well. In fact they claimed the chemistry was instant. Parvesh noted, "A lot of us had worked together before. And then Riz and I have known each other for years. Primarily because you become audition friends."

Rizwan described an event early on that bonded the cast, "We had a couple of weeks once we had gotten cast in the show to when we actually started shooting, with rehearsals with everybody getting together. And one of our Executive Producers, Ken Kwapis, sent us out on a karaoke day where we spent the whole day at a karaoke place. I think we just hit it off right away… We’re really good friends and we hang out on the weekends as well."

Parvesh explained that the cast watches most of the show together every Thursday night. "We watch them together as a cast… A lot of our friends, family, whenever they come to town they come and join us."  He said this past week they all watched "Todd's Holi War" at director Victor Nelli's house. He added, "We’ve done that every week. I think we might be helping Anisha move tomorrow and we just always go out to eat, have a drink, everything."

But the actors professed that the real fun begins on set. Parvesh talked about the episode called "A Star Is Born" in which Gupta tries out for a local talent show. He reflected, "In the states we all have this idea, everyone who wants to be the next best singer, next best dancer. Those same wants and desires are in India, too. So the great thing about that episode for me, let alone getting to make my whole family proud and cry and squeal with delight [over] the fact that I did do a full Bollywood dance number, was the fact that we can show that the same wants and dreams are universal."

He suggested that many viewers relate to his character. "The fun that Gupta taps into, where I get a lot of messages on Facebook and Twitter from kids, and I think it’s because he is kind of a man child. He’s a little socially awkward, maybe not the most developed… I get a lot of physical humor, and I get a lot of site gags. And that victim humor that just makes people go, 'Aww, we’re laughing at you. We feel bad, but we’re still laughing at you.'"

Rizwan related that he taps into the passion and dedication that his character Rajiv displays, "That ambition and the fact that he’ll do anything… I might not go about it the same way that he does, but I feel like I definitely connect to that drive and that ambition of what he really wants… I totally understand where he’s coming from."

The actors mentioned an upcoming episode called "Gupta’s Hit and Many Misses" and how that storyline came about. Rizwan recalled, "Me and Parvesh [were] doing a scene from 'Home Sick to My Stomach' which was an episode that aired a couple of months ago. And in one of the scenes I was like, 'Parvesh, do you mind if I slap you? I think it would be kind of funny.' And I think in no other show could your boss slap you. I think Rajiv has gotten to that point where this would just be funny… And so we did it… They let me slap him seven times in that episode… It was the most fun I’ve ever had on that set… And they cut everything."

Parvesh picked up the story from there, "They’ve decided to bring it into a new episode which is coming up." He also inserted, "Let’s not forget to toot our own horns. We are theater actors and we had a lot of stage combat training." He then stressed, "No Gupta’s were harmed in the making of that episode."

This slapstick style of humor came into play when the pair disclosed their greatest influences. Parvesh teased Rizwan by taunting, "Rizwan is very influenced by Buster Keaton, and Charlie Chaplin, things that he grew up with."

But Rizwan corrected him, "I grew up watching my favorite show Three’s Company. And John Ritter is somebody that I just loved that physical humor and it’s… definitely the reason that [this] is what I wanted to do. People want to be in movies… I wanted to be on a sitcom and it was because of Three’s Company."

Parvesh acknowledged, "I honestly really liked Danny DeVito… I watched Taxi and I remember thinking, 'Well, he’s short and he’s funny looking. So I’m the same guy.' And then I did have a special place for Bill Cosby because I just really assumed that I would one day be one of the Cosby Kids."

Watch Rizwan and Parvesh in action on Outsourced on NBC on Thursday nights at 10:30 p.m. EST/9:30 p.m. Central.

For related stories check out:
Johnson Smith Catalog to Offer Outsourced-Inspired Items
Our 10 Favorite TV Characters from 2010 (Real and Fake)