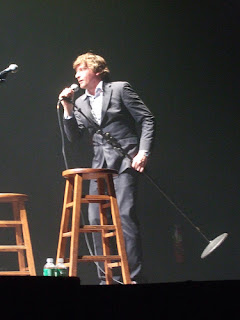 , leaving fans to wonder who will replace Michael Scott at Dunder-Mifflin. While Will Ferrell will fill the gap for a few episodes, no permanent paper company boss has been appointed.

Lots of suggestions have been floated about. Fans of the original U.K. version of the show would like to see series creator Ricky Gervais take the role. But besides a quick cameo a couple of weeks ago, the Brit has no plans to relocate to Scranton.

Other candidates that have been discussed include Will Arnett, Portia de Rossi and even Harvey Keitel. But Facebook fans recently started a campaign of their own. Their dream is to cast “Rhys Darby from Flight of the Conchords as the new Office manager.” Devotees of the short-lived HBO comedy will know Darby as Murray, the not-so-effective manager of the novelty singing duo Bret McKenzie and Jermaine Clement.

Based on a status update posted on August 23 of last year, organizers even have an idea of how to integrate Darby into the show. “Dunder-Mifflin is purchased by a paper company from New Zealand and they appoint one of their own to take over. Everyone in the office is excited thinking things will improve, but they get a very similar manager. The main difference being this one has an accent.”

The whole notion wasn’t implausible. Earlier in August, Darby had been mentioned alongside Eastbound & Down

’s Danny McBride as possible replacements for Carell. During a recent interview on Los Angeles radio station KROQ’s Kevin & Bean Show, Darby said he never heard back from NBC after a two-hour meeting about joining the show.

But that’s neither here nor there now. Rhys is moving on, joining the cast of the CBS pilot How To Be a Gentleman. If his pilot goes, it will unfortunately mean that he will not be “present” when The Office returns next season.

Warner. Bros. to Remake The Stand

Looking for the Next Mickey Rourke