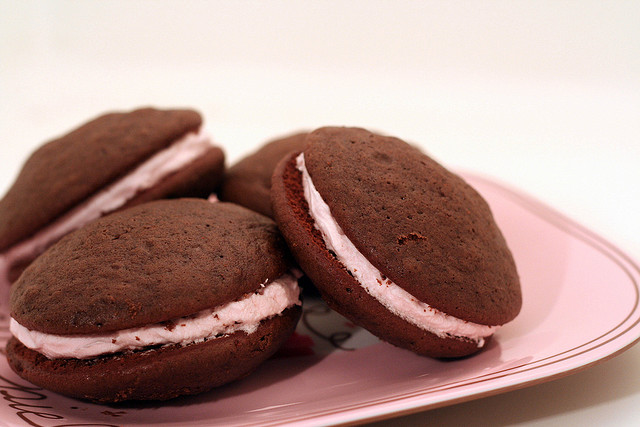 Who doesn't love a good whoopie pie? The dual round flat chocolate cakes with a creamy frosting sandwiched in between has been a favorite for generations. But now two states are fighting over the sugary confection. Apparently both Maine and Pennsylvania are calling dibbs on the whoopie pie. Both claim the snack originated in their state.

Back in January a Maine representative, Paul Davis, introduced a bill naming the whoopie pie as the official state dessert (later amended to "state treat"). He was egged on by Amos Orcutt, the president of the Maine Whoopie Pie Association (yes there is such a thing). Amos read that Pennsylvania claimed to be the founding father of the chocolaty snack, so Davis traced its roots. Right back to Labadie's Bakery in Lewiston, Maine, in 1925.

Once news of the bill spread, Pennsylvanians were up in arms including a group who started the saveourwhoopie.com. Residents of the Quaker state say the dessert dates back to Amish country.

The website has a formal statement which reads, "As you may know, the state of Maine is attempting to claim the whoopie pie as its official treat. Like you, we here in Lancaster County are shocked – shocked, I tell you – at this act of confectionary larceny, and we need your help." To date they have collected more than 1,700 signatures.

So who do you think should get whoopie pie bragging rights? We're leaning towards the Penn Dutch. Maine has the lobster after all.