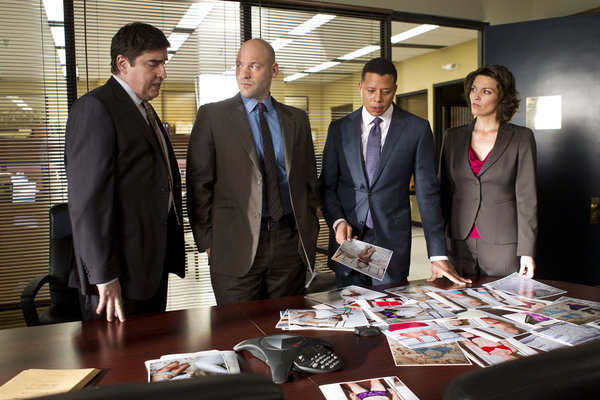 Law & Order: LA returns tonight after a long break and a major cast overhaul. Skeet Ulrich is out. Alana De La Garza is in. And Alfred Molina and Terrence Howard no longer alternate weeks. Instead Terrence remains a DA upholding the "law" while Alfred is now a detective on the "order" side. Alana, who starred in the original Law & Order series, which was just canceled after 20 years on the air, reprises her role as Connie Rubirosa in the LA version. In a recent conference call interview we spoke with Alfred and Alana, along with series' creator Dick Wolf, about the new dimensions to their roles.

Alfred's character, Ricardo Morales, who was a DA in the first half of the season, has returned to his roots as a cop. The actor pointed out, "The interesting thing, from a creative point of view, is that he goes back with all the knowledge and all the experience and all the insight and wisdom, hopefully, that he's gained as a prosecutor going back to his original job as a detective. So there's lots of room for the writers, lots of room for all the creative team to really explore that… When you have characters that reveal themselves to have many folds and crevices and creases, that's where all the interesting stuff happens. And so there's plenty there."

Dick added, "I have to say that, because I can unabashedly beat Alfred's drum, that the interrogation scene in the second episode with the secret service agent is one of those wonderful scenes, that you would have a hard time accepting if you were just dealing with a guy who had been a cop for the last 25 years. It was so intellectually elevated the way Fred conducted it that it utilized the best of both a really good cop and the knowledge of how to deal with somebody at this level, that he has obviously gained in the prosecutor's office. So that one scene… showed that it was additive. That the experience that was in his back story really came home to roost."

Molina said he also has settled into the character well because he has a lot in common with Ricardo. He remarked, "I was very happy to discover that Ricardo Morales is remarkably similar to Alfred Molina, in many, many ways. It was just a happy coincidence that he's the son of an immigrant family, he's the first person in his family to go to college, he carried the weight of responsibility of his parents' expectations and his own ambition -- which has left certain buttons that can be pushed, certain chips on his shoulder. And as I was discovering this about the character, I thought, 'Hmm, this reminds me of somebody I know rather well.' So it's a very easy fit in that way, which is crucial really when you're trying to develop a character that's going to last, one hopes for a long time."

Alana's character, Connie, has moved to LA from New York to take care of an ailing mother and so joins forces with Terrence Howard in the DA's office. But she is still the same strong willed and determined force to be reckoned with as she was in her previous incarnation. Alana commented, "The fun thing I always say about Connie is that she's kind of sassy and smart and quick, and will apologize later, and will go head to head with anybody and question them in that sense. And with Joe Dekker she does the exact same thing, behind closed doors [she] will question and discuss. But then in the end, that's her partner and team and they're out for justice."

Between Law & Order gigs, Alana did a brief stint on CSI: Miami

. She mentioned that she's glad to be back with her old family. "[On] CSI: Miami my character was the damsel in distress. So to be a part of Law & Order and defend the damsel in distress is a real gift. And it's a lot of fun to be that passionate, strong, intelligent woman. And CSI: Miami was a wonderful experience as well. It's just completely different. As actors we live to move from role to role and become new people. And so it's kind of part of the journey."

Take the journey with Alfred and Alana on Law & Order: LA tonight at 9 p.m. EST/ 8 p.m. Central. The series will return to its regular time slot on Monday, April 18 at 10 p.m.